Triple duty for Al Carter at Sebring this week!

Al Carter is going to have a very busy week at Sebring International Raceway. Carter is doing triple duty and will race three different competitive racecars in three different racing series. First he will compete with TRG-AMR in the TUDOR United SportsCar Challenge co-driving the No. 007 Aston Martin Vantage then he will also compete in the Continental Tire Sports Car Challenge co-driving the No. 7 Rebel Rock Racing Porsche and finally he will also compete in the first round of the 2014 Lamborghini Super Trofeo North America. 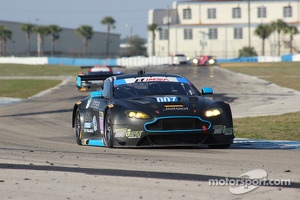 It has been almost seven weeks since the No. 007 Eagle Tech/B+ Foundation/Jetset Magazine crossed the finish line of the first race of the 2014 TUDOR United SportsCar Championship at Daytona International Speedway. It has been a long wait for drivers Al Carter, James Davison and David Block, but a short time for the TRG-AMR crew that worked really hard to perfect the Aston Martin Vantage V12 and study all the data they gathered following the Rolex 24 At Daytona.

On February 20-21, TRG-Aston Martin Racing tested at Sebring International Raceway to prepare for next week-end's Mobil 1 Twelve Hours of Sebring Fueled by Fresh from Florida. Al Carter, James Davison and David Block guided the No. 007 Aston Martin V12 Vantage GT3 car to the top five on the speed charts in nearly all of the sessions on the challenging, 17-turn, 3.74 mile circuit.

Al Carter was happy to return to the track and had a good test. "It was a good test for this Aston Martin team. The drivers, the three of us, are starting to gel and learn from each other. I'm really pleased with our performance and my performance. Sebring is a tough track, so this is a great place to test because it challenges you in all the braking zones and all of the exits. We're getting the car worked out, and I'm looking forward to the race as well as the rest of the season. I think our car will be competitive" said Carter, who will compete in his second Twelve Hours of Sebring in a row. 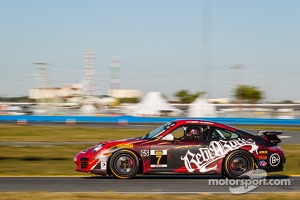 TRG-AMR team owner Kevin Buckler was excited about the test. "This was a fantastic test for us. I'm really, really proud of the boys in the 007. James is doing a good job, as usual. David and Al turned some great laps. We run toward the front, which is where we want to be. We were P1 to P5. The car is really capable. We pushed the envelope; that's what we're supposed to do at Sebring. I'm really excited about the Twelve Hours. I think we have a good shot" added Buckler.

Al Carter's co-driver James Davison was also happy about the Sebring test. "This Sebring test has been highly beneficial for us going into the Twelve Hours weekend both from the Continental and the TUDOR series side. I've been able to work with my new teammates Al and David. Both of them have done a great job, and I certainly feel confident for the race. We had all of the performance at the Rolex 24 but just had a few mishaps that we have prepared for by doing this test. I look forward to getting a result in the 007 car at Sebring" said Davison.

David Block who is co-driving with Davison and Carter in the four races of the 2014 Tequila Patron North American Endurance Cup was also happy with his test. "It was a really great two days with the team. There were big improvements for myself and the team overall. The car has been handling great. We have a great crew. I've been learning a lot from my co-drivers, getting a lot of coaching and really making big strides personally. I think the team is in great position for the Twelve Hours now" announced Block.

The Mobil 1 Twelve Hours of Sebring Fueled by Fresh from Florida is the second longest race of the season and the only twelve hour race on the calendar. Aston Martin cars have competed in the Twelve Hours of Sebring since the earlier days of the race. Aston Martin almost won the overall race in 1953 when Briton, Reg Parnell and George Abecassis co-driving their DB3 finished 2nd overall in the 12 hour race and won the S3.0 class. Knowing that race fact, TRG-AMR and their drivers are looking to continue the great Aston Martin Racing Sebring tradition and will race on the footsteps of their peers next Saturday.

In addition to racing in the TUDOR Championship with TRG-AMR, Al Carter will also compete in two other races at Sebring International Raceway this week. He will race in the second round of the 2014 Continental Tire Sports Car Challenge with co-driver Brett Sandberg. Carter and Sandberg had a great first race at Daytona and they are looking forward to scoring another top result with Rebel Rock Racing. Al Carter will also compete in the first round of the 2014 Lamborghini Super Trofeo North America with Mitchum Motorsports. Al loves racing the Lamborghini Gallardo. He raced in a few rounds last year scoring four podium finishes in four races including his inaugural race at Kansas Speedway.

FOX Sports 1 will carry live coverage of the first three hours of the 62nd running of the Mobil 1 Twelve Hours of Sebring Fueled by Fresh From Florida on Saturday, March 15, the second round of both the TUDOR United SportsCar Championship and the Tequila Patrón North American Endurance Cup. The remainder of the event will be streamed live on IMSA.com and through the FOX Sports Go mobile app. The IMSA.com stream will feature the FOX Sports broadcast team and be available globally. FOX Sports 1 also will televise a three-hour full race highlight show from Sebring beginning at 8:30 a.m. ET on Sunday, March 16.

TRG-AMR aims for elusive victory at Twelve Hours Of Sebring