Two chances at victory for Ferrari in northern California

Ferrari North America is hoping to leave Laguna Seca with two victories at the end of this weekend.

May 1, 2014 (Englewood Cliffs, N.J.) – It is with one eye on history that the teams representing Ferrari North America arrive at Mazda Raceway Laguna Seca for this weekend’s round of the 2014 IMSA TUDOR United SportsCar Championship.

The drivers of the Ferrari 458 Italias from Scuderia Corsa, Risi Competizione, AIM Autosport, Spirit of Race and Krohn Racing will be attempting to emulate the victory by Pete Lovely, driving the a Ferrari 500 Testa Rossa, at the very first race held at Mazda Raceway Laguna Seca in October of 1957. On that day, Lovely finished ten seconds ahead of John von Neumann in a Ferrari 625 TRC. This weekend, four Ferrari 458 Italias will compete in the first TUDOR Series race on Sunday, featuring the PC and GT-Daytona class, while two will compete in the second TUDOR Series race for Prototype and GT-LeMans cars.

Having scored the first victory of the year for Ferrari at the Rolex 24 at Daytona, as well as finishing second at the Mobil 1 12 Hours of Sebring, the no. 555 AIM Autosport Ferrari 458 Italia driven by by Townsend Bell and Bill Sweedler enters the weekend as the championship leader in the GT-Daytona class. This is a home event for Bell, who was born in San Francisco. 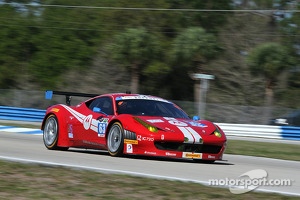 Fast but unlucky in the first two events was the no. 63 Scuderia Corsa Ferrari 458 Italia. Last year’s GRAND-AM GT champion Alessandro Balzan and teammate Jeff Westphal led both at Daytona and Sebring in the Scuderia Corsa Ferrari. The local ties are also strong for Scuderia Corsa – team principals Giacomo Mattioli and Art Zafiropoulo also own Ferrari of Silicon Valley which located in nearby Redwood City. Westphal lives in San Francisco.

In the GT-LeMans class, Risi Competizione will arrive at Laguna Seca with a new driver lineup in the no. 61 Risi Competizione Ferrari 458 Italia, as Pierre Kaffer will join former Scuderia Ferrari driver Giancarlo Fisichella. Krohn Racing, who narrowly missed the podium at Sebring, will return with the no. 57 Krohn Racing Ferrari 458 Italia for drivers Tracy Krohn and Nic Jonsson.