The Honda-powered HPD ARX-03b of Johannes van Overbeek and Ed Brown, the quickest car on track over the final 40 laps of Sunday’s Continental Tire Monterey Grand Prix at Mazda Raceway Laguna Seca, chased down the competition and posted the first TUDOR United Sports Car Championship victory of the 2014 season for HPD and Extreme Speed Motorsports.

The fourth round of the 2014 TUDOR United SportsCar Championship got off to a strong start for HPD and the Extreme Speed team, as van Overbeek claimed the pole in Saturday’s qualifying, shortly after HPD announced the sale of the first two ARX-04b Honda coupe chassis to ESM for the 2015 season.

Starting driver Brown ran a clean opening stint, pitting from fourth place to hand the car over to van Overbeek for the remainder of the two-hour contest. Turning the fastest laps of the race, van Overbeek enjoyed a clear track during his first stint, emerging in third place after his final scheduled pit stop on Lap 49. Passing the Action Express Corvette DP of Joao Barbosa on Lap 58, van Overbeek then began to chase the Wayne Taylor Racing Corvette DP of race leader Jordan Taylor. 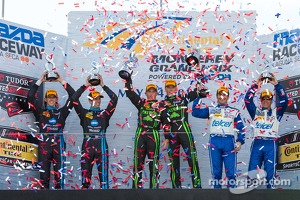 The two contenders ran nose-to-tail for a half dozen laps, until van Overbeek took advantage of a minor slide by Taylor and claimed a lead he would not relinquish over the final 15 minutes. Once in front, van Overbeek extended his advantage to nearly six seconds at the checkers.

Extreme Speed’s second LMP2-style prototype, the #1 HPD ARX-03b Honda, was started from third by team owner/driver Scott Sharp and stayed in the thick of the lead battle through the first round of pit stops, when Sharp handed the car over to co-driver Ryan Dalziel. Running third, Dalziel was forced to park the HPD after 41 laps with suspected transmission failure.

The inaugural TUDOR United SportsCar Championship resumes at May 31, with a prototype-only race on the temporary Belle Isle Park street circuit, as part of the Verizon IndyCar Series Grand Prix of Detroit race weekend.

Steve Eriksen (Vice President and COO, Honda Performance Development): “What a great day for HPD and Extreme Speed Motorsports, with ESM converting yesterday’s pole into today’s victory in a flawless run from both Ed Brown and Johannes van Overbeek. It was great to see Ed Brown score his first win as a driver in LMP2 as Ed and Patron have been integral components of HPD’s success in Le Mans prototype racing in America for a number of years. This was the perfect way to cap off a great weekend of racing, not to mention the exciting news that our new ARX-04b coupes will be a part of ESM’s future successes in the 2015 season.”

Johannes van Overbeek (#2 Extreme Speed Motorsports HPD ARX-02b Honda) pole qualifier, finished 1st, first win for HPD in the 2014 TUDOR United SportsCar Championship and 70th victory for the HPD chassis: “From the outside, it probably looked pretty easy, but inside is another story. I was more nervous when Ed [Brown] was in the car, he did a great job and put us in a great spot, and then I got in. I tried to be clean and knock off good laps, and I figured if I kept doing that and stayed clean, we’d be toward the front when the race neared the end. There were no yellows; my hat is off to all the drivers out there. I could not be happier. This is my home race. I thought I was cursed at this track because I’ve come so close to winning so many times. To win with Ed, Tequila Patrón, ESM and Honda, it is just fantastic.”