Team perseveres through practice problems for solid grid placing in 29-car field; no. 33 moved up to fifth after two competitors have qualifying times disallowed.

DAYTONA BEACH, Fla. – The No. 33 ViperExchange.com Viper GT3-R team rebounded from some mechanical issues in practice to record the seventh fastest lap Thursday in GT Daytona (GTD) qualifying for this weekend’s 52nd Rolex 24 At Daytona. 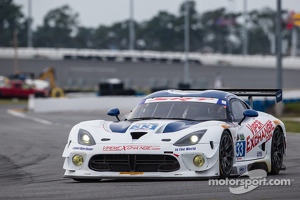 With Ben Keating’s full-season co-driver Jeroen Bleekemolen at the wheel, the No. 33 ViperExchange.com entry ranked as high as third in the constantly changing timing rankings and never slipped out of the top-10 in the hectic 15-minute session. Bleekemolen’s top lap of 1:47.255 (119.491 mph) ultimately was good enough for seventh but the No. 33 was moved up to fifth place on the starting grid when the pole-winning and third-place qualifiers had their times disallowed following post-qualifying technical inspection.

“In the end it is good that we made it back out because the guys had to do a lot of work, which they did great, so I am real happy with that,” Bleekemolen said. “We are not that far off pole, it is very competitive, very close, and that is the way it is going to be in the race. I think we can be pretty happy, we should be quite competitive and it is going to be a long race, that’s for sure.”

Bleekemolen’s top lap was less than 3/10ths of a second slower than the disallowed times and only slightly more than 2/10ths behind the new pole-winning lap.

“In a weird way I would say we are excited about P7 and even happier about P5,” Keating said. “We did not get the practice time we wanted in the morning and to end up now fifth after the challenges we had was a great job. We still feel like we have a lot of work to do to the car to have a car that is good to race for 24 hours. We were able to do one fast lap but apparently the car is a handful to drive. We are going to go back now and see if we can make it a consistently quick car which is a whole challenge in itself.”

Thursday’s problems included lost time with a differential issue and a later engine misfire that was quickly fixed. Despite solving the respective problems, the No. 33 team barely did more than one flying lap in either of Thursday’s pair of practice sessions.

Night practice that followed qualifying Thursday was more productive with all four team drivers getting time in the No. 33. Joining Keating and Bleekemolen is former overall race winner Emmanuel Collard and Bleekemolen’s older brother Sebastiaan Bleekemolen.

“The temperature drops a lot at night, so you have to be careful for a few laps but on the race track it is no problem to see because there are light everywhere,” Collard said. “For the first two laps, especially out of the pits you have to be very careful, it is very slippery. You just have to give it two warm up laps.”