Where can the Viper get faster to catch the competition at Sebring?

The factory SRT Vipers ran well in the opening hours of the Rolex 24 at Daytona before power steering issues dropped both of them from contention for the win in the competitive GT LM class of the United SportsCar Championship.

The team tested at Sebring last month, but they have not been able to match their pace from Daytona, trailing the Corvettes, Porsches, and Ferraris in the practice sessions prior to Saturday’s 12 Hours of Sebring.

“We came here and tested,” explained Marc Goosens. “We had a pretty solid test, but we don’t seem to be able to so far this weekend to match that. When we tested, the IndyCars had tested a few days before. I think the IndyCars laid down a different type of rubber compound on the track, which creates grip. Whereas the rubber put down by the Continental tires in the Tudor Championship is not so good for us. But it’s the same for the others. Porsche tested here and they were fast and they’re still fast right now. I think we’re missing it somehow, somewhere this weekend. We’re still trying to keep up with the others.”

So far, the car shared by Goosens, Dominick Farnbacher, and former IndyCar champion Ryan Hunter-Reay has been the quicker of the two Vipers. 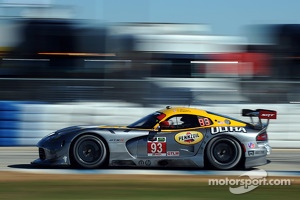 Hunter-Reay has done about 10 laps in the car during the four pre-race practice sessions, but he’s confident that the team will be able to keep up with the Corvettes and Porsches. “The Corvettes have taken a big step-up since Daytona,” he said. “The Porsche has been real fast just like it was as Daytona. We don’t seem to be quite as fast as Daytona compared to everybody else, but I think we’re right there.”

Hunter-Reay thinks the backside of the track favors the Viper, which he says handles the notoriously bumpy Sebring track pretty well. But he knows that it’s “going to be a tight fight because GT LM is probably the most competitive class.”

Wherever the cars qualify on Friday afternoon, Goosens is also confident that the cars will run well during the race. “I am not too worried about the race,” he said. “It’s a long race and there are a lot cars on the track. The [cars] that keep their noses clean will go very far. A lot people underestimate the 12-hour race and come into it with a different mindset than a 24-hour race. If the car’s reliable, then we should be fine.”

Goosens and Hunter-Reay will know how well they have done at about 10:30 p.m. Saturday evening, when the checkered flag has fallen on the 62nd running of the Sebring 12 Hours.

Magnussen ready to bounce back at Sebring with Corvette