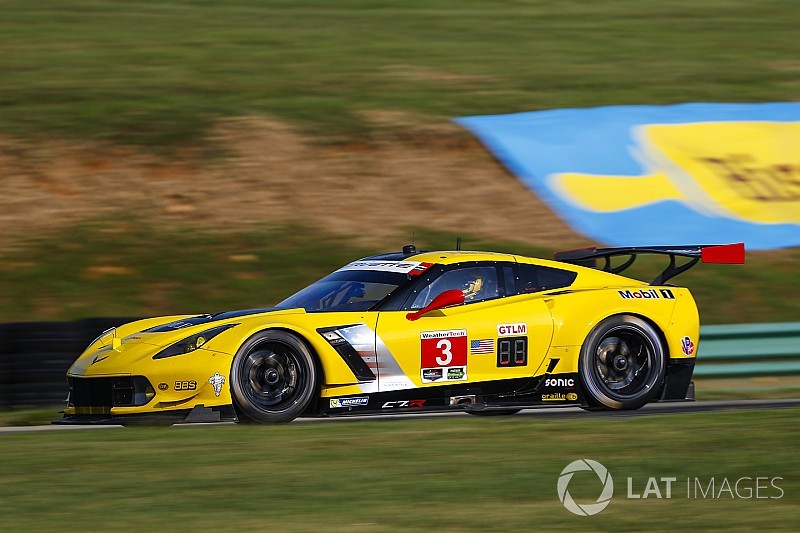 Alexander Sims and Bill Auberlen appeared to have the WeatherTech SportsCar Championship race at VIR in the bag until a very late puncture handed the win to the Corvette C7.R of Antonio Garcia and Jan Magnussen.

Sims’ BMW M6 grabbed the lead from polesitter Joey Hand’s Ford GT at the start and immediately pulled several car lengths, while behind the Corvettes benefited from Giancarlo Fisichella’s Risi Competizione Ferrari 488 falling back to seventh behind the second Ford of Richard Westbrook.

Sims pulled a 3sec lead within 3 laps, while Tommy Milner in the #4 Corvette kept applying the pressure to third-placed John Edwards in the second BMW.

On Lap 12, Edwards had to drive his BMW back to the paddock after it spewed its power steering fluid away, allowing the Corvettes up into third and fourth but already more than 10sec behind leader Sims.

The next significant move was Westbrook pitting on Lap 25, relinquishing fifth to Fisichella and handing over the #67 Ford to Ryan Briscoe.

Sims pitted on Lap 28, by which time he had a lead of 19.5sec, as he handed over to Bill Auberlen with 1hr50mins to go. A lap later, Hand was in to give Dirk Muller his chance at the wheel of the #66 Ford and Magnussen gave up the #3 Corvette to Antonio Garcia. Then came the #4 Corvette and the Ferrari, with Oliver Gavin and Toni Vilander taking over respectively. Risi’s team was so fast that Vilander emerged in second, ahead of Muller and Gavin. The deficit to Auberlen’s BMW was 14sec.

Garcia was able to get around Gavin who then found his car under physical assault from Briscoe’s Ford, but he survived, as did his fifth place.

With an hour to go, Auberlen pitted and gave the car back to Sims with a 24sec lead, as Vilander lead, still working hard to keep Muller’s Ford behind him, with Garcia close behind them both, and six seconds ahead of Corvette teammate Gavin.

Following their stops, the #3 crew got Garcia out ahead of both the Ferrari and the Ford, and while on cold tires he had to cede second to the Italian car, Muller stayed behind him for several laps before dropping away.

With Fisichella now back at the wheel of the 488, he was able to not only drop Garcia to the tune of 3.5sec, but also pare down Sims’ lead to 12sec with half an hour to go. However, that came to naught when suddenly Fisichella ran off the road and tumbled down to sixth.

That left Sims managing a 12sec lead over Garcia who was now eight seconds clear of Muller.

With just a dozen minutes left to go, however, there was high drama. Milner got a run on Muller’s Ford down the long back straight but the pair made contact in the braking zone, and spun off the track.

Yet even more dramatically and almost simultaneously, their respective teammates took over first and second places! Sims had to dash to the pits with a damaged left-front tire. It presented Garcia with a now easy win, 17sec up on Briscoe, with Fisichella back on the podium, pressuring Briscoe all the way to the end.

Sims was down in fourth, ahead of Milner and Muller, but Milner picked up a puncture, probably caused by the earlier contact, and had to make a late stop. He was still able to emerge in sixth, ahead of the works Porsche 911 RSRs which were way off the pace all weekend, not helped by Patrick Pilet sliding his #911 into a barrier at one point.

Andrew Davis’ Stevenson Motorsports Audi deposed Karam on Lap 3, but then a tire deflation caused a huge double spin and suspension damage that effectively removed him from contention.

Karam’s relief was short-lived, however, as he was passed by Madison Snow’s Paul Miller Racing Lamborghini and Christina Nielsen’s Scuderia Corsa Ferrari in that first stint.

Without any errors or misfortunes though, it was clear that this should be Change Racing’s day: Mul’s lead over Bleekemolen was 10sec by Lap 15.

A silly squeezing battle between the Acura NSX of Katherine Legge and Karam ended with Legge twice ramming Karam’s Lexus which appeared to be brake-checking her, allowing his recovering teammate Hawksworth to slip past both. The impacts caused her hood to fly up and block her windshield, naturally obliging her to pit to have the hood taped down. Karam would receive a 60sec stop and hold penalty.

Following the stops, Trent Hindman – filling in for Ben Keating who rushed to Texas to protect his property in the wake of Hurricane Harvey – fell behind the Turner BMW still being driven by Krohn. However, Mul’s lead remained 10sec.

Mul had a major scare trying to get around a Porsche backmarker, getting sideways and making hard contact with his right front fender but the Huracan survived and he soon stopped and handed over to Corey Lewis albeit with a heavily reduced lead.

In fact the lead was down to 3sec over the Turner BMW, now with Jens Klingmann at the wheel, while the Riley Mercedes, to which Bleekemolen had returned, was 44sec down.

Throughout that final stint, Klingmann hounded Lewis, particularly when they encountered the limping Vette of Milner on the final lap. However, Lewis was absolutely faultless in defense and hung on to win by one second, with Bleekemolen 50-plus seconds in arrears.

The Paul Miller Lambo of Madison Snow and Bryan Sellers had stopped early and with the race including no caution flags – not even for Scott Pruett ramming his Lexus into a barrier – Sellers had to make a stop with five minutes to go He resumed in fifth, but now behind the Alessandro Balzan/Christina Nielsen Scuderia Corsa Ferrari.

Gunnar Jeannette and Cooper MacNeil were sixth in the WeatherTech Porsche, ahead of Karam’s Lexus.