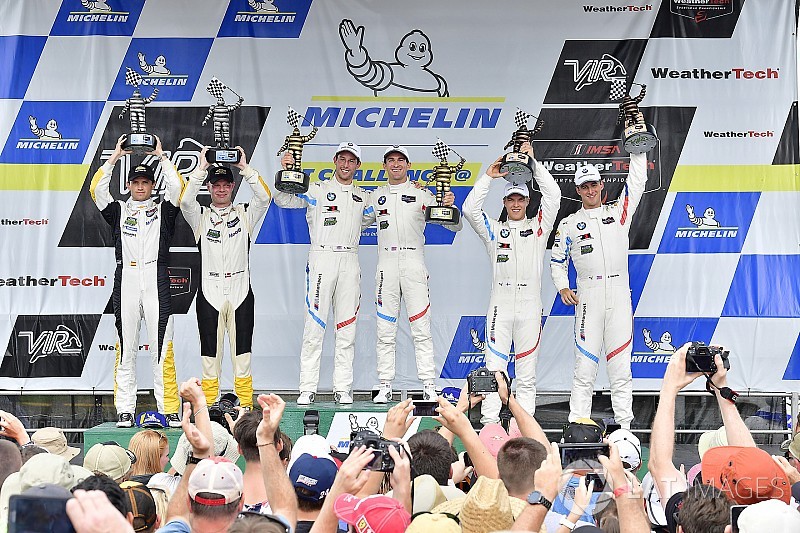 Sims clashed with a GTD car and spun, which resulted in a drive-through penalty, but a full-course yellow meant a switch to an alternate strategy, and Sims unleashed strong pace leading in clear air in the final hour of the race. It marked the first win for the new BMW M8.

At the start, pole-winner Richard Westbrook’s Ford GT led the fast-starting BMWs of John Edwards and de Phillippi. Front-row starter Patrick Pilet (Porsche) was slow away and slipped back to fourth by Turn 1, and then Antonio Garcia’s Corvette also got around him a few laps later.

There was trouble behind, as Tommy Milner’s #3 Chevrolet Corvette ran wide on the opening lap, and as he tried to recover he later made contact with Earl Bamber’s #912 Porsche on the straight that sent Milner spinning wildly off the track, while Bamber rotated at the next corner due to a flat right-rear tire.

Westbrook handed over to Briscoe just after the 50-minute mark, a lap before Edwards followed suit to hand the #24 car to Jesse Krohn, with de Phillippi doing likewise to Sims a lap after that. But Briscoe was in trouble with a clutch problem, and the #67 was out of contention after going to the garage for repairs.

During the first pit sequence, Porsche short-filled to get Nick Tandy out in the lead after he took over from Pilet, with Krohn running second. Third-placed Dirk Muller split the BMWs in the second Ford, taking over the #66 after Joey Hand’s opening stint.

Sims then attacked Muller, but got on to the grass, taking out the #15 GTD Lexus as he rejoined the track, with Sims also spinning – which promoted the #4 Corvette of Garcia/Jan Magnussen to fourth.

The race lost its second leader when Tandy was forced to pull off and jump out of Porsche #911 just after the hour mark, as smoke erupted from underneath.

That caused a full-course yellow, with Krohn leading Muller and Magnussen at the time. The recovering Sims was fourth ahead of Oliver Gavin, who took over from Milner in the second Chevy.

Muller lost two spots in the flurry of pitstops that followed, with Magnussen and Vanthoor gaining positions – although leader Krohn stayed out.

At the restart, Sims – who’d served a drive-through penalty for the incident – further demoted Muller. He went on to lead the race as the front runners pitted, Magnussen rejoining second ahead of Muller.

Krohn had dropped back to fifth after his final stop, but battled his way past Vanthoor and Muller to run third.

Sims used amazing pace to extend a 53s lead, and pitted with 24 minutes to go. He rejoined in the lead by over 8s from Magnussen and Krohn and went on to record a landmark win.

Muller finished fourth, ahead of Vanthoor and Milner. 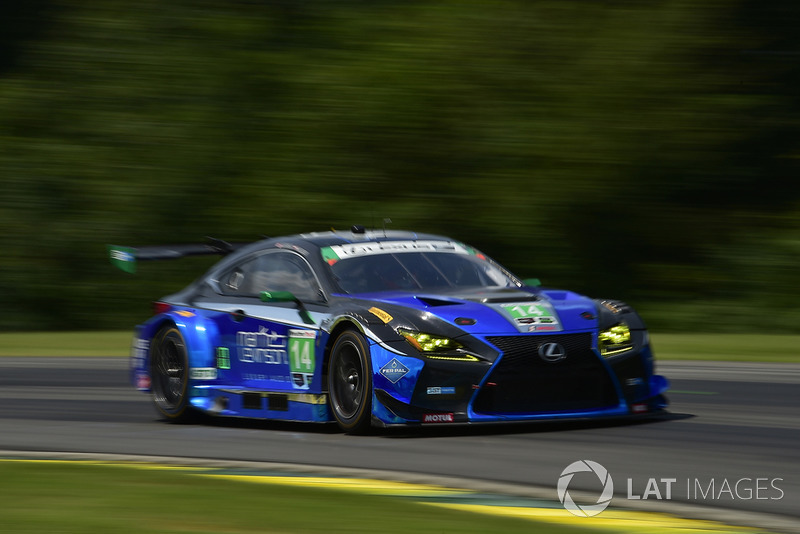 In GT Daytona, poleman Jack Hawksworth’s Lexus RC F was passed at the start by Jeroen Bleekemolen’s Riley Mercedes AMG GT. Bill Auberlen, who had been running third in the Turner Motorsports BMW M6, took the lead during the second stint, but the mid-race yellow wrecked his strategy.

The Hawksworth-driven Lexus’s race was ruined when teammate David Heinemeier Hansson was taken out through no fault of his own by the wayward GTLM BMW of Sims.

The mid-race yellow turned the race on its head, with Lawson Aschenbach’s Acura NSX leading the Magnus Racing Audi of Andy Lally.

Aschenbach then ran off track, just before a charging Bleekemolen muscled his way past Lally, and Lally turned him around. That allowed Dominik Baumann's Lexus (which he shared with Kyle Marcelli) to grab the lead, and promoted Katherine Legge to second, as Lally was given a drive-through for his part in the incident.

In the final three minutes, Baumann suddenly lost grip and pace, and allowed Legge to close right up. But she had Patrick Long’s Wright Motorsports Porsche on her tail and attacking hard. On the final lap, Legge got right alongside the Lexus but couldn’t find a way past, and Long snatched second through the final corners.