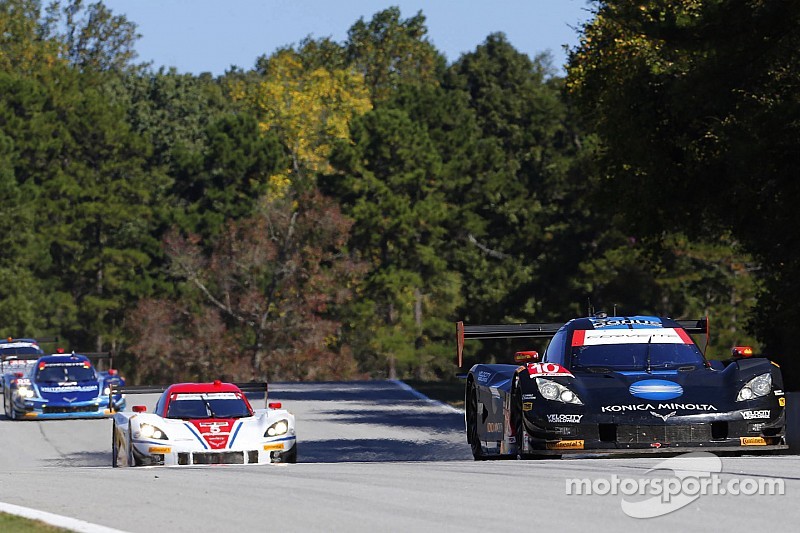 BRASELTON, Ga. – Wayne Taylor Racing held the lead at the four-hour mark of Saturday’s Petit Le Mans powered by Mazda at Road Atlanta, winning the first of three segments in the Tequila Patrón North American Endurance Cup and gaining ground in the battle for the $100,000 prize for the team championship.

With the TUDOR United SportsCar Championship team and drivers titles already in hand, Action Express Racing set its sights on winning the Patrón Endurance Cup. However, the team was running third at the end of the opening segment, allowing both the No. 10 Konica Minolta Corvette DP and the second-place No. 90 VisitFlorida.com Corvette DP to gain ground in the competition recognizing top performers in the four endurance races on the TUDOR Championship schedule.

The No. 5 Action Express team with drivers Joao Barbosa and Christian Fittipaldi continue to lead the overall standings with 34 points. Wayne Taylor Racing’s No. 10 Konica Minolta Corvette DP is now second with 30 points, followed by the No. 9 Action Express Racing Corvette DP with 28 points, and the No. 90 VisitFlorida.com Corvette DP team with 27 points.

“We won the (TUDOR) team championship, we won the drivers’ championship, so now we can try to win the race and the Patrón Endurance Cup,” said Fittipaldi, who shared the season title with Barbosa. Sebastien Bourdais is the team’s third driver for the event.

Chevrolet added a point to its lead over Ford in the manufacturer standings, and now leads by five points, 43-38.

The Patrón Endurance Cup awards five points for first, four for second, three for third and two for all other competitors in key segments of the four endurance races. At Petit Le Mans, points are earned after the four- and eight-hour marks in addition to the finish after 10 hours.

The competition opened with the Rolex 24 At Daytona and continued with the Mobil 1 Twelve Hours of Sebring Fueled by Fresh From Florida and the Sahlen’s Six Hours of The Glen at Watkins Glen International.

No. 54 co-drivers Colin Braun, Jon Bennett and James Gue will share individual honors in the class once they each reach the two-hour, 15-minute minimum driving time needed to score points in the class.

PR1/Mathiasen Motorsports led the opening four-hour segment for the PC class, with Gunnar Jeannette and Frankie Montecalvo sharing the No. 52 Camp Boggy Creek/Bayshore Family of Companies ORECA FLM09. RSR Racing took second and third with the No. 09 Linospresso USA and No. 08 AutomaxUSA.com entries, with CORE autosport running fourth.

CORE autosport is a perfect three-for-three in the endurance races, with Bennett, Braun and Gue winning the races at Daytona, Sebring and Watkins Glen. With 40 points, it leads the No. 25 8Star Motorsports team by an insurmountable 10 points. The No. 09 RSR Racing team is third with 23 points.