Wayne Taylor Racing: Sebring proves to be a handful

It may be only half as long as the traditional season-opening Rolex 24 At Daytona, but Saturday’s 62nd renewal of the Mobil 1 Twelve Hours of Sebring proved once again that America’s oldest endurance race has to be the most difficult.

Such was the case for brothers Ricky and Jordan Taylor and their veteran Italian co-driver Max “The Ax” Angelelli, whose No. 10 Velocity Worldwide Chevrolet Corvette Dallara Daytona Prototype for Wayne Taylor Racing (WTR) performed flawlessly in finishing a solid second at each of the last two Rolex 24s but had their hands full seemingly all day and night long during today’s once-around-the-clock endurance classic. 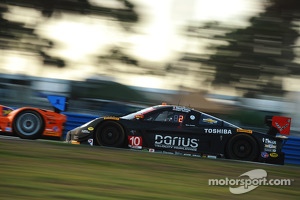 The Taylors and Angelelli were flirting with a podium some 75 minutes to go before the checkered flag, but the team’s third and ultimately decisive incident of the race plucked the No. 10 Corvette out of contention for good, leaving it to settle for a seventh-place finish.

It was Ricky Taylor’s turn to play the role of closer, and he found himself in third place at the 10-hour, 45-minute mark behind Memo Rojas in the eventual race-winning No. 01 Chip Ganassi Racing with Felix Sabates Ford Riley, and David Brabham in the eventual runner-up No. 1 Extreme Speed Motorsports HPD ARX-03b Honda. But Taylor’s windscreen was oiled up in a big way by the No. 25 LMPC-class Oreca, bad enough that Taylor ventured off-course at one point and didn’t even realize it. The WTR crew called him into the pits immediately to clean the windscreen and top off the fuel tank, putting the No. 10 Corvette off-sequence from the race leaders in ninth place.

The caution flag flew some 20 minutes later, and the race didn’t go back to green until another 31 minutes later, negating any potential advantage the No. 10 Corvette might have owned by being on its own fuel strategy. The top two finishers happened to pit under green just before the yellow, and the remainder of the field pitted during the yellow to set up a final 21-minute sprint to the finish. Taylor restarted in seventh place, and was only able to hold his position until the checkered flag.

“There seemed to be no passing during that last run,” said Taylor, who qualified the No. 10 Corvette third late Friday afternoon. “I think it was because the pace was just so high and I think everybody was in the position they belonged in after racing for almost 12 hours. I feel really bad that we had to make an extra pit stop because of the oil. I don’t know if anybody else had that problem out there. That was frustrating. But when I had a clean windshield, the car was the best it’d been all day at the end, there. Finishing seventh is kind of ho-hum when you look at it. It was a long race. I’m just happy we got through the middle because it was so difficult to keep the car on the track and stay out of trouble. Jordan gave me the car in a really good position for the end of the race. The first time it got oiled up, I couldn’t see a thing and I actually went off and didn’t even know it. It was very fortunate that I didn’t hit anything. We had to come in and clean it off at that point. Then it got oiled up again. It wasn’t as bad but I couldn’t see quite well enough to be able to maintain the pace I might have needed to pick up positions. But it is what it is. This was our first time here. It’s a tough race and all. I think we’ll just lick our wounds and move on to the next one. It could have been a lot worse, I guess.”

Approaching the midpoint of the race, at the five-hour, 50-minute mark, Jordan Taylor averted disaster when he had to venture way off course to avoid two cars that collided heavily right in front of him in a high-speed section of the 3.74-mile road circuit between turns 15 and 16. The off-course excursion left the radiator grill of the No. 10 Corvette caked with dirt and other debris, necessitating an unscheduled pit stop to clear it. He resumed in 10th place after that incident.

Later in the race, Taylor took over from Angelelli in the fourth position and kept the No. 10 Corvette in the top-five for the remainder of his single stint before handing it over to his brother in second place.

“That was the toughest race I think we’ve ever had, and to come out with seventh place probably doesn’t do justice to all the hard work everybody put into it,” Jordan Taylor said. “But it was just a matter of not being able to bounce back all the way from the few issues we had today – the early penalty, my having to go off with cars spinning and colliding in front of me in the middle of the race, and Ricky getting his windscreen oiled up and going off, which necessitated another pit stop toward the end of the race, there. All in all, I think we might have had a solid podium car, at best, despite all the things we had to deal with. But we brought it home in one piece both at Daytona and here at Sebring, and we’re still sitting second in the points, so we’ll head to the early sprint race part of the schedule and try to build some serious momentum.”

The penalty Taylor referred to was a serious blow at the time – a stop plus 60 seconds in the “penalty box” for entering a closed pit at the three-hour, 21-minute mark. Angelelli was running second when another prototype went off course and was stuck in a tire barrier. Before race officials called for the caution flag, the team called Angelelli into pit lap for tires and fuel. As Angelelli was making his way across the commitment line at the entrance to pit road, officials finally called for the yellow. Angelelli proceeded to his pitbox and the fuel-and-tire stop was executed. Officials issued the penalty some 24 minutes later, just after the race went back to green. Angelelli served the penalty and resumed in 11th place and fell off the lead lap.

Another caution 14 minutes later for an accident approaching the start-finish line enabled Angelelli to take advantage of a wave-around the pace car and put the No. 10 Corvette back on the lead lap, where it stayed the rest of the race.

“To win races like this, you have to be good, but you also have to have things go your way,” Angelelli said. “Call it luck, or coincidence or whatever. Our car definitely was maybe a fourth-place car. With a little bit of luck, maybe a podium finish. If I had to put my finger on one thing in particular, I think we underestimated the heat in the track and what it did to our car from a setup standpoint. That’s my opinion. This is a great race and we would have loved to have had a better result. You know, the positive is we didn’t damage the car, we didn’t hit anybody because of us – that’s two of the most difficult races we did not hurt the car. With all of the traffic and everything here and at Daytona, that says a lot. If you don’t hit anybody and bring the car back in one piece, that’s a big key to success. But we just had enough other things set us back today that a win or a podium finish just was not going to happen.”

Despite the seventh-place finish, the team held onto second place in the provisional point standings, albeit nine points behind the Rolex 24-winning No. 5 Action Express Racing Corvette, which finished third today, and one point ahead of the No. 01 Ganassi Ford.

“The team did a great job, again,” team owner Wayne Taylor said. “We got really unlucky with the accident that led Jordan to have to go off the track, and then having to pit to clean up all the debris off from that, which put us in the back. We went a lap down early in the race, but we recovered from that. Then we were up to second or third late in the race, but then Ricky got covered in oil and we just couldn’t fight our way all the way back. The cars are so close out there that there’s isn’t much of a margin for error. Points-wise, we’re very much fighting for the championship, which is our ultimate dream. So, overall, I’m OK with this result. Seventh in the race today, second in the points heading to Long Beach, I’ll have to admit I’m happy.”