Keen (Charleston, S.C.) had the wheel of the white and black WeatherTech Porsche for the 15-minute qualifying session. The onslaught of new machinery and the new rules for the inaugural TUDOR Championship race has a very competitive field of very different cars. Keen put down a lap of 1:47.647 (119.056 mph) that will have the WeatherTech Racing team starting from the eighth row in GTD. 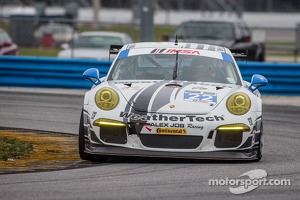 "We had a slow start to the day," Keen said. "We had some electrical gremlins in the first practice. The second session of the day, Shane Lewis did some laps and went fast right off of the bat. A great job by the new addition to the team. I got two laps in today before qualifying. The car felt good like it did at the Roar test. Any other day a 47.6 is pretty good lap time here at Daytona. In the Porsche world, it looks like we are doing pretty good. Some of these GTD cars are just rockets. With qualifying over we can focus on the race. That is where this team really shines. We will be going for two wins in a row at Daytona for the WeatherTech brand."

MacNeil will run some quality laps in the night session starting at 6 p.m.

"I will get my laps in tonight," MacNeil said. "This morning we had a few electrical issues which stopped the motor at 6500 rpms. That slowed us down, so we had to come in and fix it. We were second quick in the afternoon session. I am looking forward to running some good laps tonight."

Newcomer Lewis (Jupiter, Fla.) is pleased with his first run in the car.

"It was great to finally get behind the wheel," Lewis said. "You study the video and the data and it is great to get in the car and do some laps. Until you actually drive the car, you really don't know what you have. I have a lot to learn about the car, but I got in the 49s right away which I am happy with today.

Alex Job, team owner, had his team diagnosing the No. 22 WeatherTech Porsche early in the day.

"After a really good test, we went out in the first session and had an electrical issue," Job said. "The team did a great job to find the problem and fix it. We returned in the second session and were second quick. Qualifying was another story. Leh put in a good lap, but there are some very fast cars in the GTD field. With top drivers and all new cars, the Porsches have some work to do. We are now focused on setting-up a good race car and planning our strategy for 24 hours of racing."