With a Podium, Risi Competizione leads the way for Ferrari in Monterey

The day’s second race, which featured the Prototype and GT-LeMans classes, saw the no. 62 Risi Competizione Ferrari 458 Italia finish a fighting third position. Drivers Pierre Kaffer and Giancarlo Fisichella started from the back of the field after changing tires after qualifying, negating their qualifying time. Kaffer made several positions during the opening stint, and strategy by the Risi Competizione team allowed Fisichella to lead the race in the second hour. Although he was forced off track in two instances in the closing stages of the race, Fisichella finished the race in third position. 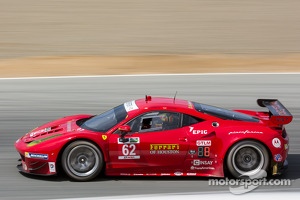 For Giuseppe Risi’s team, which has endured a challenging start to the TUDOR Championship season, it was the strongest result of the year. Finishing in 11th position was the no. 57 Krohn Racing Ferrari 458 Italia which was driven by Tracy Krohn and Nic Jonsson.

The next event for the TUDOR Championship will be May 30-31 at The Raceway at Belle Isle in Detroit, Michigan.