Filipe Albuquerque is holding a 12sec lead for Wayne Taylor Racing with three hours to go, but Scott Dixon is charging the Ganassi Cadillac back into contention as he recovers from a penalty. 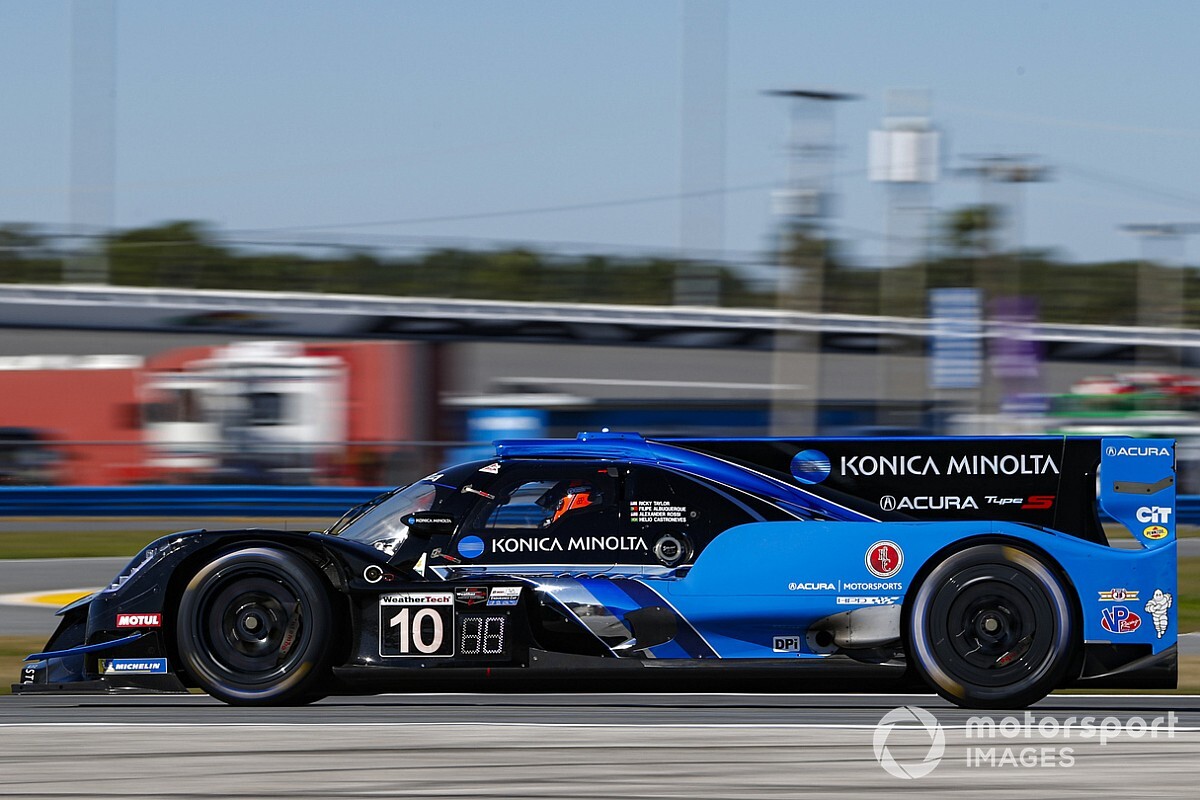 The 19th hour began with a fascinating duel for the lead between Alexander Rossi in the Wayne Taylor Racing Acura ARX-05 and Kevin Magnussen in the Chip Ganassi Racing Cadillac DPi-V.R.

Meanwhile, one of their strongest rivals, the #31 Whelen Engineering Action Express Racing Cadillac lost fourth gear – according to Felipe Nasr – and got dragged behind the wall, losing 20 laps before rejoining.

The 10th caution of the race, to retrieve debris, allowed Olivier Pla in the Meyer Shank Racing Acura and Simon Pagenaud to bunch up behind the leaders, while Harry Tincknell in the Mazda RT24-P ran a lap down. The pitstop that followed allowed MSR to replace Pla with Juan Pablo Montoya, while by not making a stop, the Mazda got back on the lead lap.

After the restart, Magnussen edged alongside Rossi to take the lead, while Pagenaud even more swiftly dealt with Montoya to move into third. However, Magnussen was given a drive-through penalty for letting the wheels rotate while he was on the jackstands. That dropped him some 50sec down, and meant he had to lose further time clawing through the GTs.

The next time the Prototypes pitted, Filipe Albuquerque took over the leading WTR Acura from Alexander Rossi, and Scott Dixon replaced Magnussen in the fourth placed Ganassi Caddy. The six-time IndyCar champion got his deficit to the leader under 40sec, as Albuquerque was needing to defend from a very feisty Pagenaud, the pair of them a dozen seconds ahead of Montoya.

After the next round of stops, Mike Rockenfeller took over from Pagenaud and fell away from leader Albuquerque to the tune of 11sec, while AJ Allmendinger had the Meyer Shank Acura wound up nicely, and closed within 10sec of the Ally Cadillac. Jonathan Bomarito was continuing Tincknell’s good work in the Mazda, not able to gain on the leader, but more or less maintaining Albuquerque’s pace, hinting at good potential if a caution flag falls again. At the next round of stops, with 3h25min to go, Bomarito handed over to Oliver Jarvis.

Ganassi’s pitwork and Dixon’s relentless drive had lowered his deficit to leader Albuquerque to 25sec with 3h15min to go, and he was filling Allmendinger’s mirrors for lap after lap, finally making the pass for third as the 21st hour came to a close.

The three-way LMP2 battle closed up nicely under the 10th caution, Era Motorsport’s Ryan Dalziel leading Timothé Buret of Tower Motorsport by Starworks and Chris Mies of DragonSpeed. At the subsequent restart, Mies passed Buret for second, but these positions changed again when Gabriel Aubry took the Tower car and Eric Lux slipped into the DragonSpeed machine.

In GT Le Mans, the Corvette C8.Rs of Nick Tandy and Jordan Taylor made the 10th restart from first and second, albeit only after Jules Gounon’s Risi Competizione Ferrari 488 was pinged for an unsafe release from his pitbox, having split the ’Vettes at pitlane exit. Jesse Krohn and Bruno Spengler ran fourth and fifth, albeit the latter running a lap down, but at the 11th drop of the green flag, Krohn pushed his M8 ahead of Gounon’s Ferrari, although he couldn’t hold onto the Corvettes.

At the 4hr40min mark, Taylor took the lead from Tandy and swiftly pulled out a lead of seven seconds before Tandy stopped to hand over to Alexander Sims, and Taylor relinquished his seat to Nicky Catsburg. This pair continued to circulate around 8sec apart, but with Sims having to watch his mirrors for Krohn’s M8, before pitting the #4 Corvette.

At the next round of GT stops, Marco Wittmann took over from Krohn and currently runs nine seconds in arrears of Sims’ Corvette but more than half a minute ahead of James Calado in the Risi Ferrari.

GT Daytona remains a tight fight, and after the 10th caution, Philip Ellis in Winward Racing’s Mercedes AMG GT3 was out front under intense pressure from Nicklas Nielsen’s AF Corse Ferrari 488, with Luca Stolz third in Sun Energy 1’s close behind. Very close, in fact, for Stolz briefly made it a Mercedes 1-2 by passing Nielsen with 4hr50min to go, although the Ferrari driver got back ahead within half a minute.

The Wright Motorsports Porsche battle with Paul Miller Racing’s Lamborghini continued unabated as Pat Long passed Madison Snow and could only edge away. By contrast, the Pfaff Motorsport Porsche had a long stop while a steering problem was investigated and so Laurens Vanthoor fell a minute off the class leader, ahead of the two Aston Martins (Heart of Racing ahead of TF Sport), the Turner Motorsport BMW and the Scuderia Corsa Ferrari.

The battle for the GTD lead between Winward Racing and AF Corse ended in tears for the Ferrari team following the pitstops, when newly installed Matteo Cressoni squeezed Ellis from around the outside into Turn 1, forcing the Mercedes driver onto the grass on the inside. The Benz bounced over the curbs and punted the 488 into the tire wall, the bent bodywork subsequently puncturing a rear tire as Cressoni hobbled to the pits.

During this drama, the Pfaff Porsche pulled off track with steam apparently coming from the 911’s engine bay, eliminating another car that had been on the lead lap. Laurents Vanthoor reported to IMSA Radio that the car had lost drive, possibly due to a driveshaft or clutch failure.

Thus it was a Mercedes 1-2 at the head of the field with four hours to go, with Long in third 20sec down, and Bryan Sellers now piloting the PMR Lambo in fourth.

Having pulled within one second of Ellis’s Mercedes, Stolz in the similar SunEnergy car pitted one lap earlier and remained onboard, while Ellis handed the Winward car to Maro Engel. Half a minute back, Long relinquished the Wright Porsche to Klaus Bachler who maintained the car’s margin over Sellers, but fell 40sec behind the two Mercedes.

Whelen Cadillac knocked out of R24 contention by gearbox failure