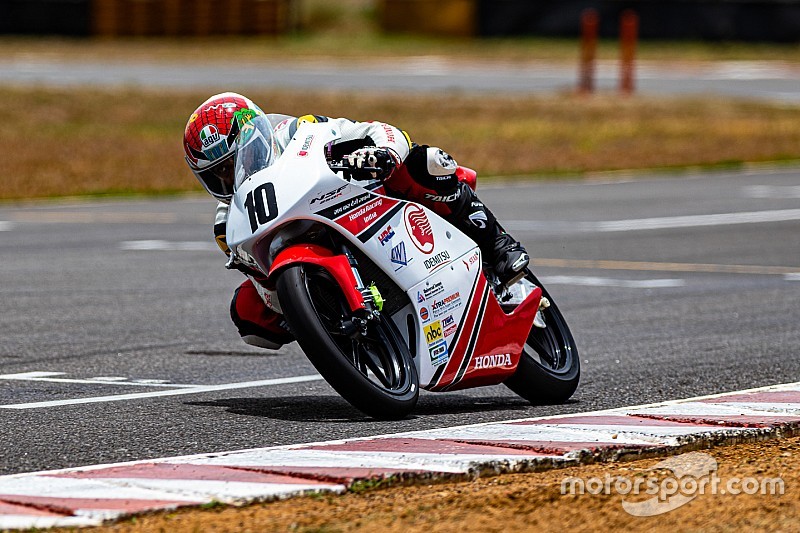 S Varoon claimed a dominant victory in the second ever Honda India NSF 250 race in Chennai after a multi-bike crash wiped out pole-sitter Mohammed Mikail.

Mikail, who claimed a historic win in the first ever race for Moto3-spec bikes in India on Saturday, made a slow getaway from pole position and was tagged by fellow front-row starter Kritik Habib just as they crossed the start line.

This left Mikail unsettled and into the path of Varoon, the contact between the two leaving Mikail on the ground. Mikail then received a third hit from an unsighted Mohsin, and the duo immediately retired from the spot after the incident.

The start line drama put Habib in the lead of the race, although he quickly lost places to both Kavin Samaar Quintal and Varoon before crashing out on the second lap.

Varoon, who had dropped down to second-to-last before carving his way up the field, wasted little time after Habib’s crash, passing Quintal at turn 1 on the following lap to seize the top spot.

He extended his advantage rapidly from there on, eventually taking the victory by a mammoth margin of 10 seconds.

Geoffrey took the final podium spot in third, with Charan T last of the classified finishers in fourth.

Sarthak Srikanth Chavan, the youngest rider on the grid at 12, retired from the race on the penultimate lap, joining Mikail, Mohsin and Habib in the list of retirees.

The Honda NSF 250 is a new one-make category that sits at the top of the Honda India Talent Cup ladder, and has been introduced to fast-track development of Indian riders by offering them Moto3 spec machinery in their own country.