Honda-backed Rajiv Sethu and defending champion Jagan Kumar shared top honours in the opening round of National Motorcycle Championship at Coimbatore on Sunday.

Competing in the flagship Sport Sport 165cc category, Sethu dropped a position at the start before recovering to second behind teammate Mathana Kumar S.

Once in front, he was able to extend his advantage and finish just over half a second ahead of Mathana in the shortened six-lap race.

TVS Racing’s Harry Sylvester finished another three seconds adrift in third, while teammate Jagan’s race was brought to an early halt with an electrical issue. 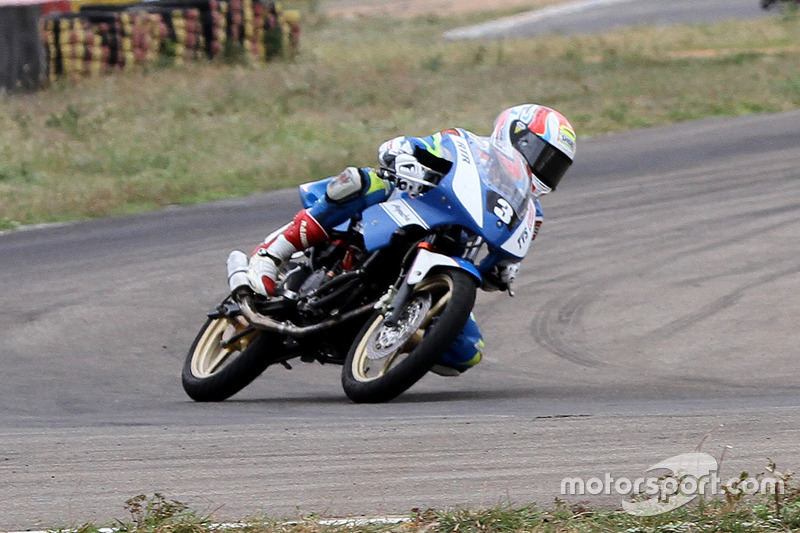 Jagan, however, bounced back in style by taking an emphatic 1.5s victory in the second 15-lap race.

After making a slow getaway from pole position and dropping to third, the TVS rider fought back and overtook KY Ahamed and Mathana, who made an error at turn 5, in quick succession to take the top spot on the podium.

Sethu, however, endured a nightmare race where he was forced to start from the pitlane due to an engine failure.

He gradually made his way up to fourth, before a crash at turn 1 undid all the good work and led to his retirement.

In the Super Sport 300-400cc category, Amarnath Menon secured a double win, although the second victory didn’t come as easy as the second one

The Gusto Racing rider was chased to the line by Apex Racing’s Kishoar VS, the duo finishing just 0.080s apart.

Anthony Peter from Kingdom Motorsport finished a distant third, some 18 seconds behind the Menon and Kishoar.