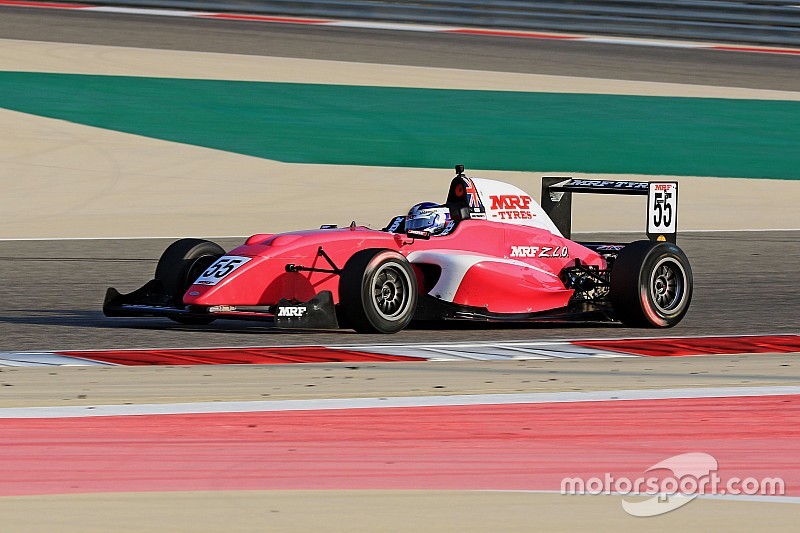 Jamie Chadwick scored a double win on the final day of MRF Challenge’s Bahrain round to cut down the deficit to championship leader Max Defourny.

Chadwick, who took her first MRF win at Bahrain on Friday, qualified third on the grid for Race 4 and immediately overtook Michelangelo Amendola at the start, before setting off in pursuit of polesitter Petr Ptacek.

She found a way past Ptacek with a textbook Turn 1 move on lap three of 10, and then went on to score a comfortable 2.505s victory.

Defourny was unable to make much headway after starting sixth on the grid and it took him until lap seven to finally demote Amendola. He was eventually classified fifth, his first non-podium finish of the season.

Defourny started on pole position for the final race of the weekend, but made his now-characteristic slow start, slipping behind fellow front-row starter Chadwick.

The Belgian racer tried to fight back through the opening sequence of corners but had to turn his attention towards Danial Frost, who had rapidly closed in on him.

By the time Defourny staved off the threat from Frost, Chadwick had built up a two-second lead, which laid the foundation for her third win of the season.

She eventually crossed the line 1.066s ahead of Defourny, while Frost emerged on top in a three-way battle with Dylan Young and Estner to claim the final spot on the podium.

Young finished fourth, while Estner, who came off worst of the trio, was classified fifth.