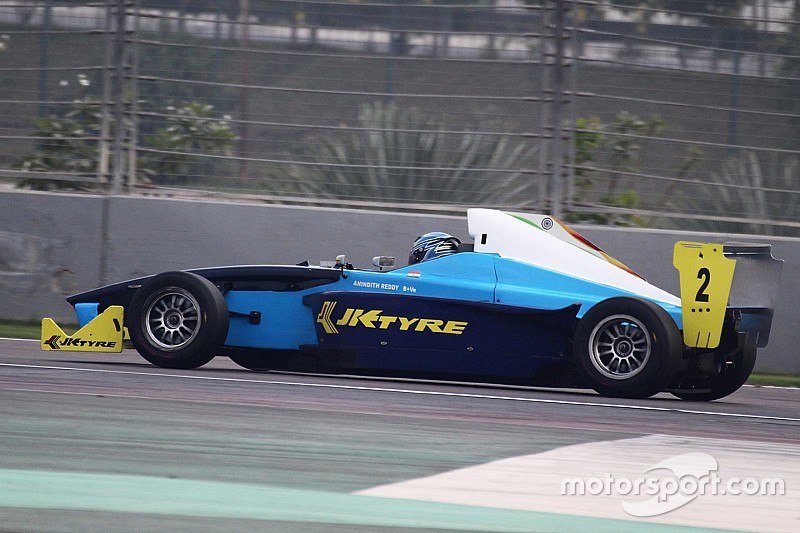 Newly-crowned JK Tyre Racing Champion Anindith Reddy signed off the 2017 season with a convincing lights-to-flag win in the final race in Greater Noida.

Reddy started from pole position and led the 10-lap race through its entirety, with only a small twitch at the parabolica section being the only anomaly in an otherwise perfect display of dominance.

With this victory he clean sweeped the final round of the championship, much like he did last year when he first won the title.

While the Hyderabad-based driver was unthreatened throughout the race, Nayan Chatterjee and Lorenzo Pegoraro had a long tussle for the second spot.

Pegoraro got the jump on Chatterjee at the start of the race, but couldn’t pull away from the Mumbaikar’s slipstream.

On lap 3, Chatterjee dived down the inside of Pegoraro at turn 4 to seal the position, having made countless failed attempts to make a move previously.

After losing a spot to Chatterjee, Pegorararo then fell into the clutches of Vishnu Prasad, who was steadily closing in on the top-three runners after dispatching Diljith T S early in the race.

And on the final lap he was able to get past the guest driver, earning himself a spot on the podium. The two drivers virtually went side-by-side to the chequered flag, separated by just 0.036s on the timing screen.

Bryan Perera, who started from back of the pack following a retirement in Race 3, also caught up the battling duo, but couldn’t take advantage of their rivalry to sneak a surprise podium. He was eventually classified fifth, less than a second behind the two.

Nirmal Uma Shankar was ninth at the flag while the top 10 was completed by Mira Erda, the only female driver on the grid.