Nayan Chatterjee made it two victories out of two in the second round of JK Tyre National Racing Championship after a mid-race collision between early race leaders elevated him into the lead. 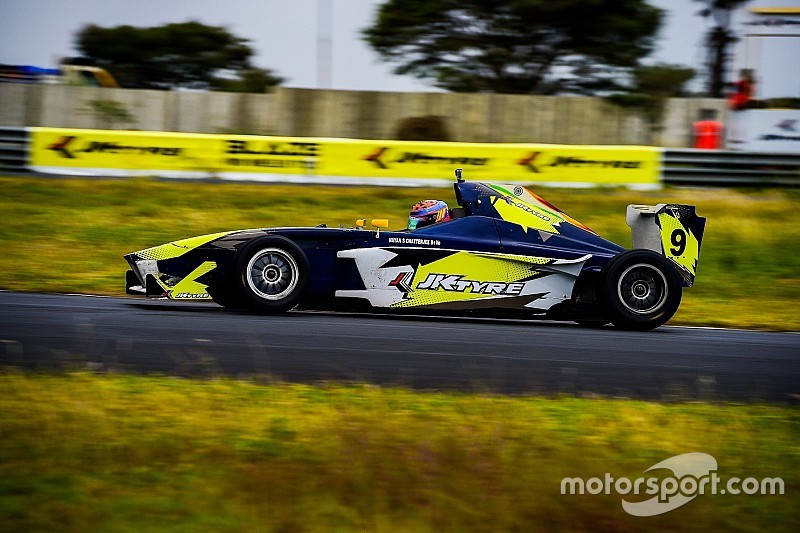 Manav Sharma started the reverse-grid Race 2 from pole and held position in the opening laps, but an off for fellow front row starter Sudarshan Rao Karwal brought out the safety car and put Sharma’s lead under threat again.

When the race resumed, Karthik Tharani, who had made his way up the pack from fifth on the grid, started hammering down Sharma, making several attempts at passing the Faridabad-based driver.

At one such occasion, Sharma pushed Tharani wide off track while defending position and as the latter rejoined the track, the two made contact.

Sharma was pitched into a spin and joined the list of retirees, while Tharani was able to continue with limited damage on his front wing.

However, he did lose a place to Chatterjee, who went on to secure back-to-back victories in Coimbatore.

Sri Lanka’s Bryan Perera finished third on road after passing Ashwin Datta at turn 1 just before a second safety car was called in, but he was later handed a five-second penalty as the overtake was deemed to have taken place under yellow flags.

Since the race finished under SC, Perera dropped to eighth and last of the classified finishers, while Datta was promoted to the final podium spot.

Yash Aradhya finished behind Datta in fourth, with Arya Singh completing the top five. Female racer Mira Erda bagged a healthy haul of points in sixth, ahead of Chetan Korada and the aforementioned Perera.

Update: Tharani was penalised for the incident with Sharma, promoting Datta to second and Aradhya to the final podium spot.