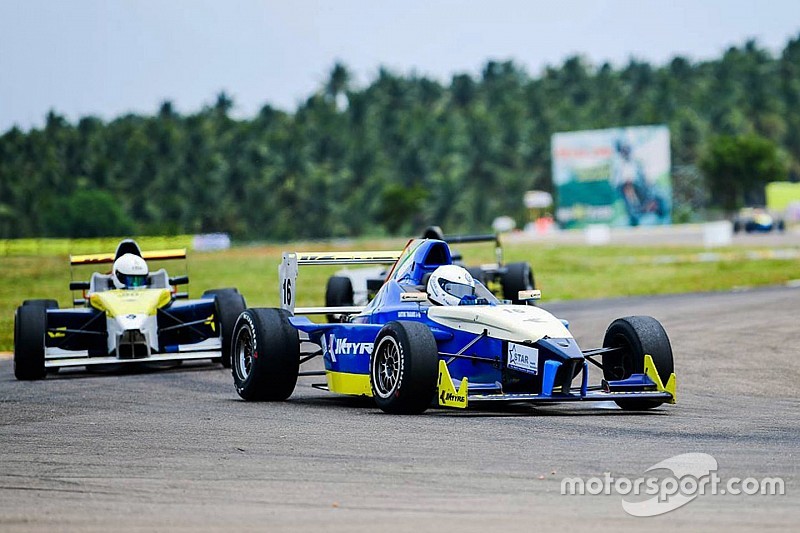 Karthik Tharani took advantage of a contact between Yash Aradhya and Ashwin Datta to end the season-opening round of JK Tyre Racing Championship with a win.

On a partially damp but drying track in Coimbatore, Aradhya led the field from pole position with fellow front-row starter Tharani following closely behind in second.

Tharani tried a move on Aradhya on the inside of turn 5, but couldn’t make it stick and slotted back into second.

The Chennai native made another attempt to pass Aradhya a few laps later, but instead became vulnerable to Ashwin Datta and Nayan Chatterjee, who both managed to pass him and drop him down to fourth.

In the meantime, Aradhya managed to check out of the rest of the field and at one point held a one-second advantage over his rivals.

However, his once unassailable lead soon came down to nil as the charging trio closed right back on him in the final third of the race.

On lap 13, Datta made a half-hearted pass over Aradhya, who got forced into a half spin in the process.

Tharani, who was running in fourth and got a full view of the incident, took full advantage of the situation to navigate through the traffic and emerge as a surprise winner from the race.

Datta finished just 0.069s ahead of Chatterjee in third, while Aradhya had to settle for seventh after being denied not only a maiden race win but also a podium in the aforementioned collision with Datta.

Arya Singh was sixth ahead of Aradhya, while Nirmal Uma Shankar dropped from third on the grid to end up eighth.