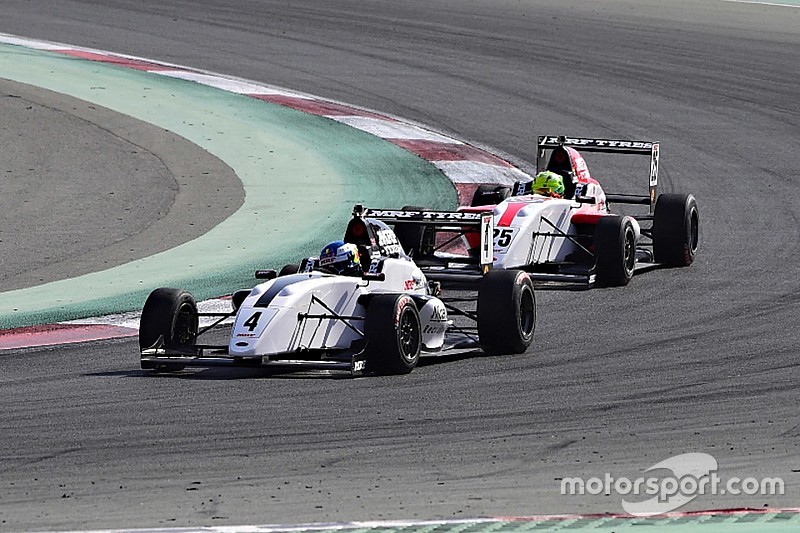 Harrison Newey took his second MRF Challenge win of the Dubai weekend in the third race, surviving a safety car restart due to a collision on the opening lap.

The British driver led from pole with Joey Mawson and Felipe Drugovich right behind him when the race was neutralised due to contact between Mick Schumacher and Juri Vips.

Both the former Italian F4 teammates retired immediately after their Turn 1 incident. Once the race resumed, Mawson wasted no time in taking the lead from Newey.

But the German F4 champion found himself losing two places on the following lap due to a mistake, dropping to third.

With father Adrian watching on from the pits, Newey controlled the last few laps to take his third win of the season, as Drugovich ended up second.

Having dropped to third, Mawson had Moraes Cardoso all over him in the last few laps, but the Australian just managed to stay ahead, just under a second separating the two over the line.

Behind the top four, Rinus van Kalmthout recorded his best finish with fifth place, ahead of Dylan Young, who re-gained sixth after Kimi Schramm dropped out of the Top 10.

The two newcomers were involved in a battle of their own with Indian Parth Ghorpade clearing Australian Zane Goddard on the final lap to take seventh.