Although the exact details of the series haven’t been forthcoming, the plan is to host the first round at the Buddh International Circuit in November this year.

The said F3 race is likely to take place concurrently to the season finale of the JK Tyre National Racing Championship.

With this series, JK wants to give local drivers a chance to pitch themselves against their international counterparts, without them worrying about putting together a budget to race abroad.

“We are going to get an FIA accredited international series, it is the old Formula 3 cars,” JK Tyre motorsport boss Sanjay Sharma told reporters including Motorsport.com India.

“Now they are rechristened and renamed so we are in the process of finalising the paperwork.

“So we’ll get them and to start with we have to do it in BIC in Delhi because there are lots of safety regulations that we need to kind of go through and eventually the intention is to become part of a world series.

“So for the first year, we’ll have 40% grid of indian drivers who will compete with the existing drivers in the series and not invited drivers or guest drivers or also-drivers but drivers who are making the difference at the top. This will be introduced in BIC and from there on will become part of the national category.”

The first F3 event will be a non-championship round to show the series bosses that India and JK Tyre are capable of hosting an event of this scale.

JK is confident that the success of this event will lead to the said F3 series hosting championship events on a regular basis in the future.

“It’s actually easier to fit into a running championship and get a round in India.” Sharma explained. “Makes life easy. But then why should people blindly kind of trust you?

“So this is a normal ethical practice that you must run an event before you pitch for a championship round. The goal is championship.” 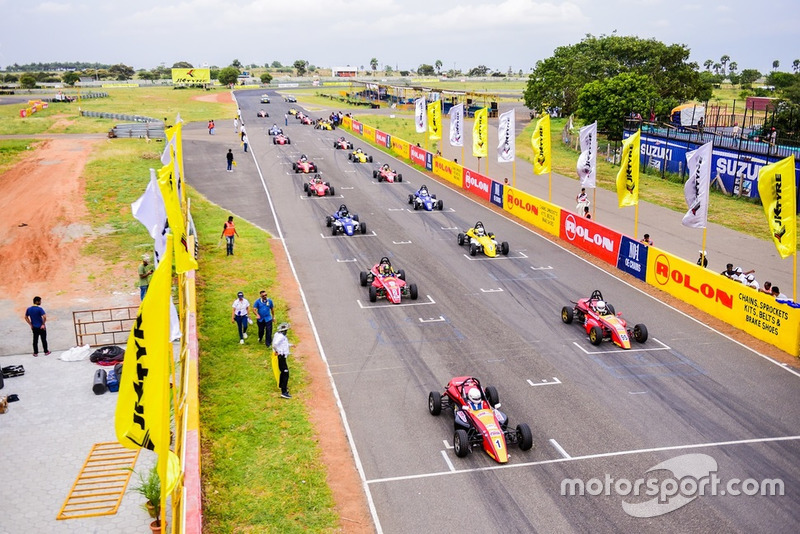 JK Tyre has overhauled its motorsport programme this year by switching it focus to grassroot motorsport. This has led to a revamped national karting championship, including a return to four-stroke karts.

The tyre manufacturer has also increased its focus to the Novice category of the JK Tyre National Racing Championship, with plans to take the grid size up to 30 cars from the next round.

However, this has also led to the departure of the Euro JK series, which used to be the flagship category of the JK Tyre National Racing Championship.

Explaining the change in ideology, Sharma said: “We’ve done a small little rejig in our thinking because in the last couple of years, we noticed that there are not many drivers who are peaking and taking advantage at the top of the table where we used to run BMW-powered formula cars [Euro JK] and that was not helping us.

“And in the bargain there are also other similar series running in the country and even they were not getting enough drivers.

"It was a limitation that the same set of people were driving all kinds of series but nobody at the end was benefitting.

“We have decided to go back to the drawing board. We have decided that we are going to work totally at the grassroots level and that’s how you’ve noticed there is a Novice category even in this race, which has almost 28 cars, which will grow to 30 cars by the time you come next time around because there were few cars that were not ready.

“So similarly in the Suzuki Cup, you have 28 new riders. So its not repetitive because even there you may have noticed last year that there was repetitive performance by the people at the top.

"And people in the middle and back were not benefitting. So both programmes now shifts to driver development and that’s how the base has been increased.”