Shah pulled away cleanly from pole position in the third race of the weekend, as fellow front-row starter Nirmal Umashankar got bogged down at the start.

Prasath’s slow getaway allowed Shah to build an early gap, which he managed to steadily extend with each passing lap. He eventually won the race by a healthy margin of 5.861s from Prasath, with Manav Sharma completing the podium spots.

Race 1 winner Nayan Chatterjee was classified fourth, with Raghul Rangasamy finishing less than a second clear of his long-time friend and rival Vishnu Prasad in fifth. 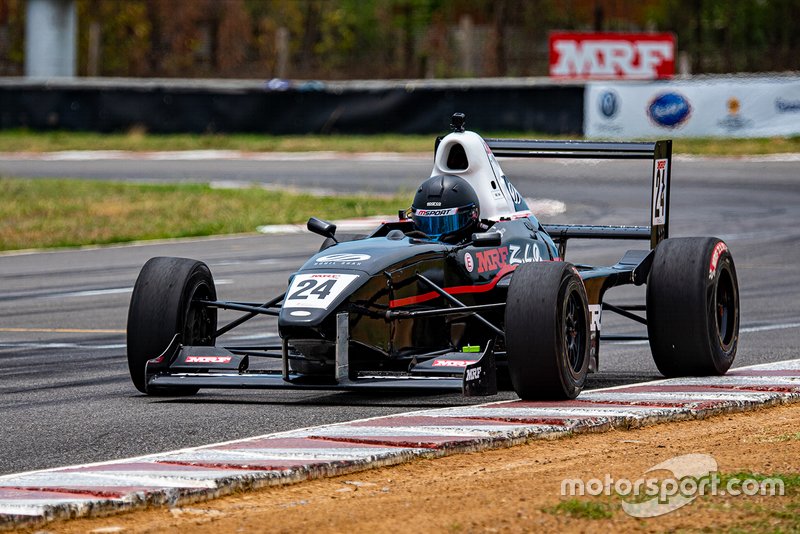 In the final race of the weekend, Shah again qualified on pole but made a sluggish start, forcing him to aggressively move across the track to hold off Nayan Chatterjee.

Over the remainder of the race, Shah had several hairy moments, most notably at the exit of turn 1 on the final lap.

However, the Bengaluru-based driver kept it together to score a complete sweep of victories on Sunday.

Chatterjee couldn’t capitalise on Shah’s troubles -or Shah's slow start - and ended up nearly two seconds behind, with Vishnu Prasad notching up another podium on his return to the series.

Sandeep Kumar led a trails of cars to the finish line, leading home Prasath, Sharma and Yash Aradhya - all finishing within a second of each other.