Karna Kadur cruised to victory in the penultimate round of Indian National Rally Championship in Chikmagalur, while Gaurav Gill staged an emphatic comeback to finish fifth overall in Coffee Day India rally.

Gill had been comfortably leading the rally in his factory-run Mahindra Super XUV500 but suffered a technical failure in the final stage of Saturday, allowing Kadur to seize the lead.

Kadur carried a 59.7s advantage into the final day and doubled the gap over his nearest rival, eventually winning by a sizeable margin of 2m15.4s in his customer Volkswagen Polo.

“The result did not surprise us considering the lead that we had overnight,” he said. “So, there was no need to push today and I was intent on bringing the car back home safely.

“We backed off a bit, used the advantage we had and finished the three Stages safely. We are very happy that we won for the third time in a row here in Chikmagalur.” 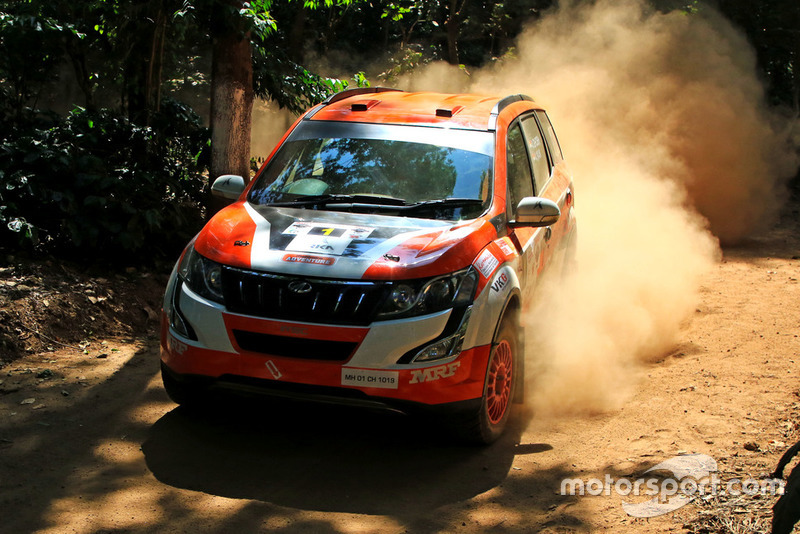 Amittrajit Ghosh put on a heroic drive while suffering from shellfish allergy and breathing problems, overhauling Bopiah to finish second.

That results allows the factory Mahindra driver to retain the lead of the drivers’ standings with 76 points, 12 clear of Kadur.

“Today, we decided to take it easy in the long stage and push in the two shorter stages. In the context of the championship, it is always good to have points in the bag,” he said.

“So, now, whoever among the three of us (Kadur and Gill being the others) wins in Kerala will emerge champion.”

Gill was forced to retire from the rally yesterday but returned for the final leg under Super Rally format, taking a six minute penalty.

But the triple Asia Pacific Rally Champion and WRC-2 driver topped all three stages on Sunday to finish second among INRC1 drivers and fifth in the overall table.

The New Delhi-based racer led the championship early on with victories in Chennai and Coimbatore, but suffered a costly retirement in Arunachal Pradesh that left him third in the standings.

Heading into the final round he trails Kadur by seven points and championship-leading teammate Ghosh by another 12.

“We had a good run the past couple of seasons, but things go up and down. It was not the best of weekends here or in Arunachal," Gill said. "So, now, we will go to Kerala next month and hope to win there.

"Today, I gave it all I had and drove 110 per cent. It is good that the championship has gone down to the wire. It is good for the sport.”

Garth Tander is a bonafide Holden racing legend – but he cut the first 50 laps of his Supercars career in Fords.

Garth Tander will race a Grove Racing Ford Mustang at the Bathurst 1000 following his shock departure from Triple Eight.

Garth Tander won't return to Triple Eight to defend his Bathurst 1000 crown next season, the team has announced.

TOM'S Super Formula team manager Jun Yamada says there is "no comparison" between Ukyo Sasahara and Giuliano Alesi after the former made his first outing for the Toyota squad in this week's post-season test.