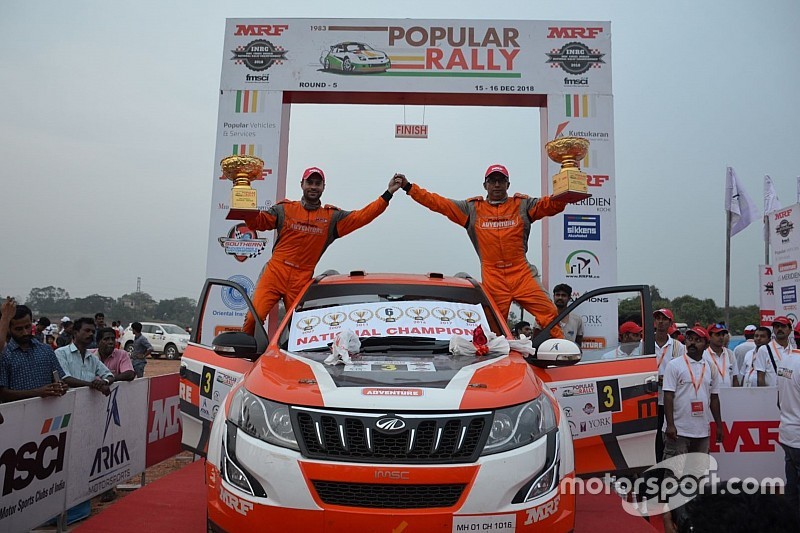 Mahindra Adventure stalwart Gaurav Gill became the Indian National Rally Champion for the sixth time with a convincing victory in the season-concluding Popular Rally on Sunday.

Gill arrived in Kerala one point ahead of his teammate Amittrajit Ghosh and seven clear of Coffee Day Rally winner Karna Kudur after taking the N1 rule into account.

And the New Delhi-based driver gave no chance to his rivals to usurp him in the title fight, winning six of the first nine stages in his Super XUV500 to establish a healthy buffer on Saturday.

He set the fastest time in another stage on Sunday, eventually winning the rally by 42.8s.

The victory, his third of the season, ensured he claimed the INRC title for the second consecutive season - and for the sixth time during his illustrious rally career.

Gill had originally slipped to third in the championship due to retirements in Arunachal and Chikmagalur (where he returned on Sunday under Rally2 rules), but the triple APRC champion retook the standings lead under the N1 rule, which allowed him to drop the Arunachal no-score from his tally.

“It was a difficult year for us, especially towards the end due to mechanical issues which were beyond our control," he said.

"Kochi was the most difficult, with narrow roads which were fast and had broken tarmac too. We had to push extra hard to stay ahead of the others."

However, he couldn't overhaul Ghosh for second place in the overall standings, despite the latter finishing only fifth in Kerala.

Dean Mascarenhas was crowned champion in the INRC3 category,