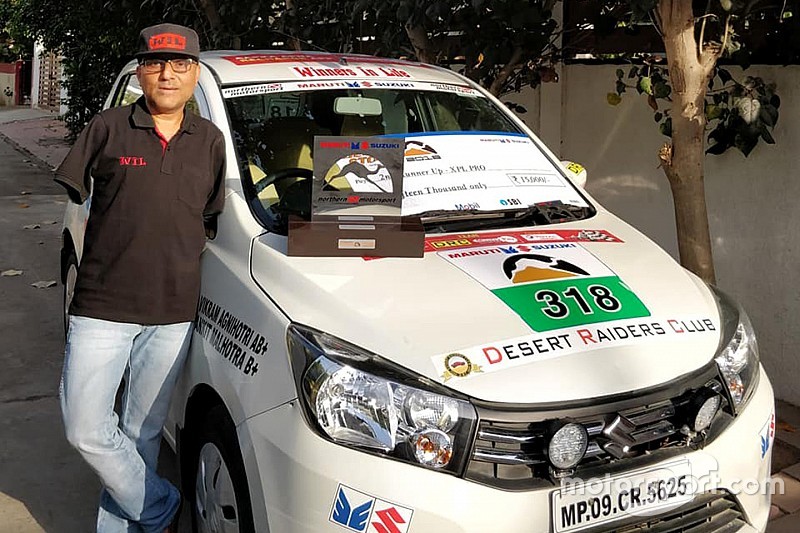 Vikram Agnihotri may have lost his arms at a tender age of seven, but that was hardly a deterrent for him to take part in the Maruti Suzuki Desert Storm 40 years later.

As we sit down in the hall room of our hotel in Jaisalmer, I can’t help but think how energetic and cheerful Agnihotri is. It’s been a long day for everyone involved, not least the drivers, who had completed the final leg of the gruelling Desert Storm cross-country rally when the temperatures were at its peak in the afternoon.

They had got little sleep the previous day, thanks to the night stages, and a two-hour long prize distribution ceremony was equally hard to bear.

So I wouldn’t have blamed if Agnihotri if he would have preferred to have his drink with friends and family, for it was nearly midnight.

Instead he had to sip it during our planned five-minute interview, which extended well beyond thrice the time limit. His story is such an inspiration that I couldn’t stop myself from knowing more and more about the life of a man who had to go through so much at such an early age.

Agnihotri was only seven years old when his hands came into contact with a high-tension wire, forcing him to get his arms amputated. For any person with a weak heart or a lack of will, it would have been the end of the world.

But with the support of his family, Agnihotri emerged from this life-changing incident stronger than ever before. He not only learnt to complete all basic tasks on his own, but also managed to play football and swim.

And in May 2015, he bought a Maruti Suzuki Celerio to become even more self dependent. With some basic modifications he was able to steer with one leg and operate the pedals with the other.

“It’s a very very minor modification I’ve done,” he told Motorsport.com India. “It’s can be done by any mechanic. Because I use my right foot for steering, the left foot is on the brake and accelerator.

“But since my left foot could not reach out to the original pedal, which is on the right hand side, I’ve attached a parallel accelerator on the left hand side of the brake.”

But come to think of it, that was the easier part. He had a much harder time getting a license as back then our country’s driving laws didn’t have provision for arms amputees. As such, his application for rejected.

However, his tenacity eventually bore fruit and after a gap of one-year-and-four months, the laws were changed and he became the first person to get a license under the new provisions.

For the kind of man Agnihotri is, he wasn’t going to restrict himself to just driving from one place to another. Instead, he starting taking part in FMSCI-sanctioned club rallies, before dipping his feet in Desert Storm.

Given it was his debut attempt and his car was far from suitable for the terrain, one must applaud him for finishing 10th overall in the Xplore category.

“Desert storm and Raid de Himalaya for India is like they are iconic,” he said. “Because literally you’ve grown up hearing about it, how gruelling it is.

“When I got an opportunity and of course with the experience of those two rallies, I was like let’s give it a shot, let’s see what the fuss is all about.

“I came with whatever vehicle was available, which is my Maruti Celerio. It is not the most suitable car for this terrain. It’s a great car, I love it, it’s really done me proud.“

“So this car is superb, but not suitable for the desert. It’s been a great learning, I’m sure when i come back next year, maybe i would have upgraded to a Brezza if Maruti makes it into an AMT.

“Then of course I won’t have an excuse. Then I will have to do well. It’s been a great experience. The result has been better than expected. I had a great time.”

The competitive spirit in Agnihotri comes from the fact that he’s a self believer. The old adage ‘if there is a will, there is a way’ certainly holds true for him - and he is keen to spread that message across everyone.

“I just want people to realise what the human spirit is capable of doing, it’s as simple as that,” he said. “It’s not about the hand or the foot, it’s all in the mind.

“My life probably will not change, but I really want to change the mindset of the people, but I would really want them to sort of you know open their minds and see the potential.

“Every individual has so much talent, unfortunately we don’t realise that. So while looking at me, don’t get inspired by me.”

One of the ways he gives back to the society is through charities, including Vital Spark, of which he is a chairman of.

“I’m a part of two NGOs. one is my very own, which is called Vital Spark,” he said. “We have now a brand called WIL, which stands for winners in life. Because I’m not focusing on differently-abled people, I would like to send my message to each and every person.

“I don't want to limit it to a small segment because i think we all need that motivation and inspiration in our lives. Basically when I say winners in life, we are all winners in life.

“That’s our brand and under that brand or that banner we are conducting a lot of motivational talk, lectures and training sessions.

“Vital spark is into pure hardcore motivation. It’s just like high dose of motivation, that’s what we want. It’s about setting a live example that nothing is impossible. Nothing actually is impossible, we all know that.

“I want to set up a statement for awareness, counselling-cum-skill development. It’s like a one-stop shop. In case you are facing a challenge you come to me and i will tell you what technology is available to aid you, I will tell you what the government policies are.

“I will even help you get advantage of those policies because getting anything from the government is not easy either. They might have policies but if you go to them they will say bring this, bring that. So even I will do that for you.

Agnihotri may be 47 now, but you get the same vibes as you do from a man in his 20s. He is keen on trying out new things, has huge aspirations and most importantly is taking the effort to make lives better. He’s a living example for everyone - including those who reside beyond the motorsport world.

Rallying under the stars - night stages in Desert Storm