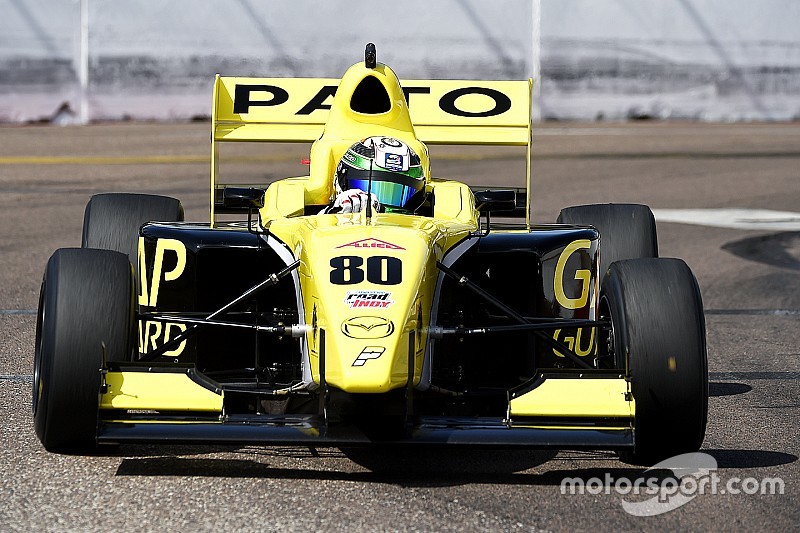 Team Pelfrey finished 1-2-5 in the series’ first race at St. Petersburg as polesitter O’Ward nailed the opening lap and was never under threat from teammate Aaron Telitz.

With a 1.5sec lead at the end of the first lap, O’Ward never let the gap shrink any further, and as the leaders got through traffic toward the end of the race, his lead went over 3.5sec.

Jake Eidson led Cape Motorsports with Wayne Taylor Racing teammate Nico Jamin by a similar margin, but had nothing for Pelfrey’s top duo, his fastest lap some 0.4sec off the winner.

Initially USF2000 champ Jamin was threatening Eidson but fell away, finishing 3.5sec behind.

Pro Mazda sophomore Weiron Tan hasn’t had the pace of his Pelfrey teammates in testing nor this weekend, but he did a solid job and started closing in on Jamin in the closing stages.

Eight seconds behind Tan was Garett Grist, sixth in the first of the four Juncos Racing entries, three seconds ahead of Jorge Cevallos for JDC Motorsports. The remainder of the Top 10 was filled by the other three Juncos cars piloted by Jake Parsons, Will Owen and Nicholas Dapero.

Telitz strikes back with race two victory at St Pete