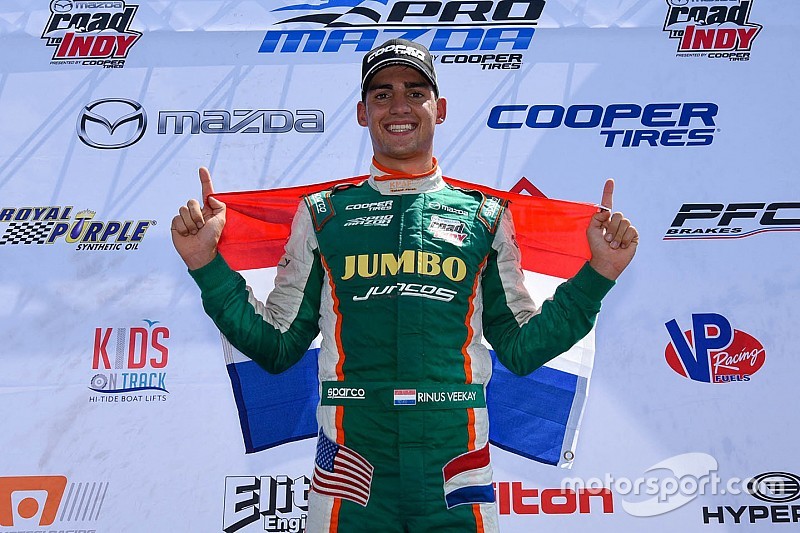 Rinus VeeKay scored his fifth straight Pro Mazda win and seventh of the season leading from the drop of the green flag to the checkered flag at the 1.25-mile oval, to edge head a Juncos Racing 1-2.

VeeKay burst into the lead from the outside of the front row and rapidly pulled away from Juncos Racing teammate Robert Megennis who had also deposed polesitter Harrison Scott’s RP Motorsport entry.

Meanwhile, having started last due to an electrical issue in qualifying, Parker Thompson’s Exclusive Autosport machine swiftly climbed from 11th to eighth but then got stuck behind the BN Racing machine of David Malukas.

Scott was having a lonely race by half distance, almost seven seconds behind Megennis, but two seconds ahead of Moises de la Vara in the DEForce Racing car, and Oliver Askew’s Cape Motorsorts machine.

By the time Thompson got past Malukas he had time only to pass the second RP Motorsport car of Mathias Soler-Obel to gain sixth. He then set fastest lap but couldn’t quite catch Askew before the end of the 55-lap race.

Up front, VeeKay eventually won by 8.5sec, with Megennis a similar distance ahead of Scott, who only just held off de la Vara.