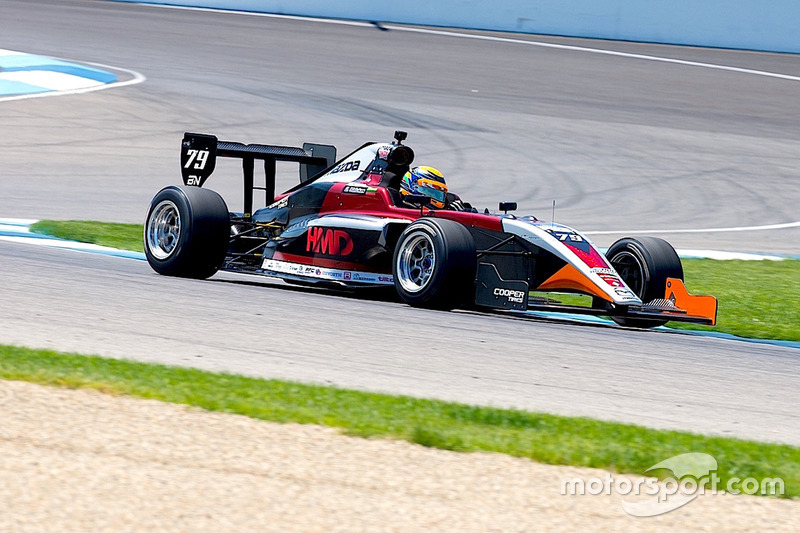 In race 1, David Malukas made a strong start from pole for BN Racing but Parker Thompson was much slower away from the outside of the front row and found his Exclusive Autosport Racing demoted to sixth by the end of the first lap. Instead, Toby Sowery moved up from fourth on the grid to make it a BN 1-2, with Harrison Scott’s RP Motorsport car in third chased by the Juncos Racing cars of Rinus VeeKay and Carlos Cunha.

The top three remained the same to checkered flag, but on Lap 9, Thompson finally managed to find away around Cunha on the run down to Turn 5, and after a couple of missteps, Thompson passed VeeKay to take fourth at Canada Corner.

For Race 2, there was a nice touch on the pace lap as Victor Franzoni in his Indy Lights car and Peter Dempsey in Jeff Green’s Pro Mazda car from last year paced the field in honor of ex-Pro Mazda racer Green who perished in a historic F5000 car last week at Canadian Tire Motorsports Park.

At the start, polesitter Malukas lost the lead to fourth-place starter VeeKay, but retook it into Turn 3, but Raul Guzman who’d started third for RP Motorsport was struck by Thompson (who’d been squeezed from the left) in Turn 5, bringing the RPM car to a halt and requiring a full-course caution to clear.

On the Lap 3 restart, Sowery drafted the cars ahead to grab second from VeeKay into Turn 1, but the Juncos driver came right back past him at Turn 5. Sowery would repass VeeKay but ran out of time and didn’t have the pace to close on his teammate and leader. Scott passed Cunha at the Carousel, while Thompson, who’d fallen as low as 12th after his first lap fracas, had recovered superbly. He took Cunha on Lap 9 of the 15 to take fifth, while VeeKay lost momentum on Lap 13 as Scott went by, and Thompson snatched fourth. 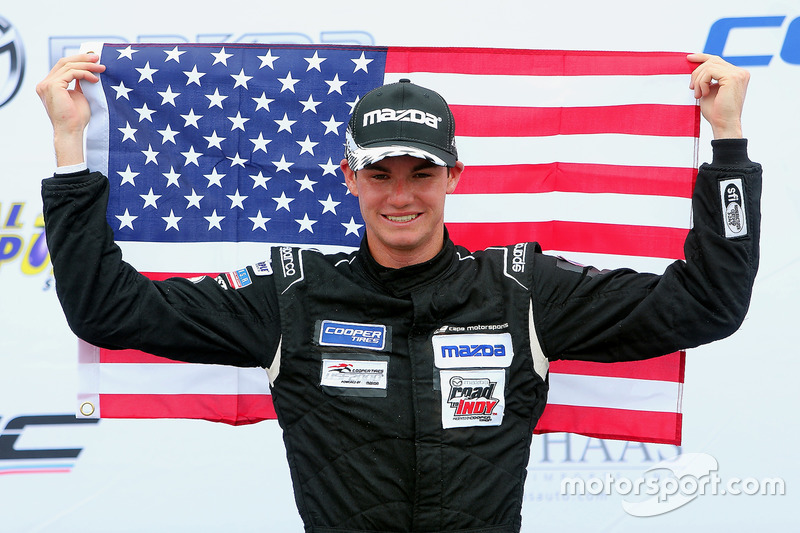 The drop of the green in Race 1 saw Kyle Kirkwood’s Cape Motorsports machine took the lead from polesitter Rasmus Lindh’s Pabst Racing car at the drop of the green, as Kaylen Frederick (Pabst), Keith Donegan – up from 10th! – (BN Racing) and Igor Fraga (Exclusive Autosport) all demoted third starter Calvin Ming (Pabst) by the end of the opening lap. Kory Enders (DEForce Racing) and Julian can der Watt (Pelfrey) also moved also past Ming on Lap 2, and Enders’ momentum continued with a pass on Fraga at the start of Lap 3.

Kirkwood had pulled a 1.4sec lead by Lap 3 when the full course yellows flew for Sabre Cook dumping her Team Benik car in the sandtrap at the Carousel.

The restart on Lap 6 was chaotic from the midfield back, but Kirkwood, Lindh, Frederick, Donegan, Enders, Fraga and Ming held position as Alex Baron moved the Swan-RJB Motorsports machine into eighth, having started 13th. Frederick, however, was piling on the pressure on teammate Lindh for second, and they ran through the bottom of the Carousel and along Kettle Bottom to Canada corner side by side. At this point, Lindh held firm, but on Lap 8, he ran off the road briefly and lost so much momentum he fell to fifth, while behind him Ming and Baron passed Fraga.

Cook, who’d rejoined the track a lap down, then spun again and hit the wall at Turn 7, bringing out the full-course caution again. That meant the race finished under caution, with Kirkwood heading Frederick, Donegan, Lindh, Enders, Ming, Baron and Fraga.

In Race 2, although Lucas Kohl took the lead from teammate and polesitter Lindh, the race went under yellow almost immediately, as a couple of backmarkers buried themselves in the Turn 1 sandtrap and two more collided on the run down to Turn 5. So Pabst maintained its 1-2-3 with Saturday’s winner Kirkwood in fourth chased by Julian Van der Watt of Team Pelfrey chased by Colin Kaminsky (DEForce Racing), Donegan’s BN entry and Korey Enders in the second DEF car.

At the restart, Lindh got back past Kohl at Turn 1 but Kohl went around the outside at Turn 5 and 6 to retake the lead, as Kirkwood started working on Frederick, displacing him on Lap 5. Further back, Enders and Baron got around Donegan. Two laps later, the yellows flew again for a collision at Canada Corner.

Van der Watt pulled into the pitlane from fifth place under caution, while following the restart, Lindh went straight on at Turn 5, and Ming and Enders collided at Turn 6. Out came the full course caution yet again, with Kohl leading Kirkwood and Frederick, chased by Kaminsky, Fraga and Michael d’Orlando sixth for Benik.

By the time those messes were cleared there was time for just a one lap dash to the checkers, and Kirkwood passed Kohl up the hill before they reached Turn 1 and swept around the outside to take the lead.

Frederick also got Kohl offline to grab second, the second Pabst driver holding onto the final podium place to beat Kaminsky (with his best career finish), Fraga and d’Orlando. Just 15 of the 26 starters reached the finish line.

Rossi out, Kirkwood in at Andretti Autosport for IndyCar 2023

IndyCar at Portland – the full schedule

The 2022 NTT IndyCar Series’ 16th round at Portland International Raceway is supported by all three steps on the Road To Indy and ARCA.

All you need to know ahead of the ninth round of the 2022 NTT IndyCar Series – the Honda Indy 200 at Mid-Ohio.

The ninth round of 2022’s NTT IndyCar Series at Mid-Ohio is supported by all four steps on the Road To Indy as well as Porsche Sprint Challenge and Stadium SuperTrucks.