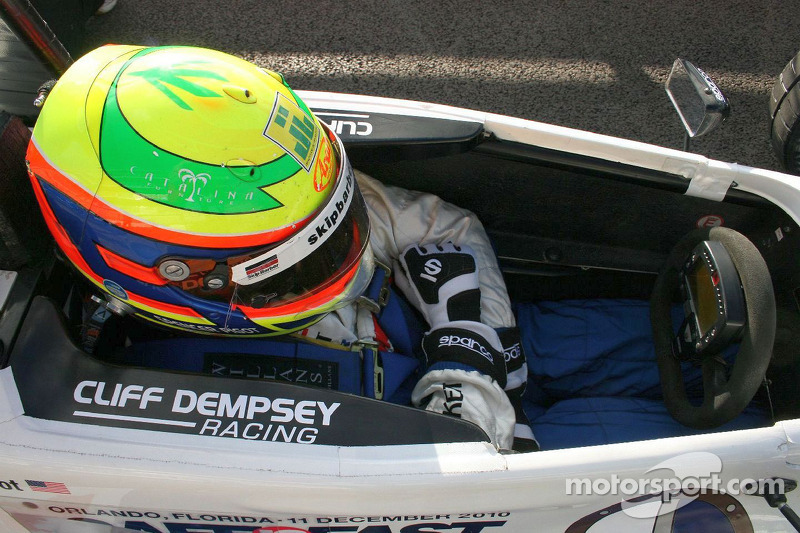 Juncos Racing’s Spencer Pigot (in photo at a previous race) took third in the first oval race of the season in Round 7 of the Pro Mazda Championship Presented by Cooper Tires at the Allied Building Products Oval Challenge. The 90 lap race ran green to the checkered flag on the 0.686-mile Lucas Oil Raceway located in Clermont, Indiana as part of the 69th Annual Visit Hendricks County Night Before the 500. The team continues to lead both driver and team point’s standings in the Pro Mazda Championship.

Spencer Pigot, 20, driving the #7 Doug Mockett & Company/Rising Star Racing/VitaminPro App/California Scents/Juncos Racing added his fifth podium finish of the season taking third in Round 7 after qualifying second. Pigot holds on to the lead of the Pro Mazda Championship.

“The car was great in the first half of the race,” said Pigot. “We were all over Garett (Grist) and I had a couple of chances to pass him but I didn’t want to be overly aggressive. About halfway through the race we started losing time and something felt wrong with the car. After the race we discovered that the right front tire had lost most of the air. To come away with a Top-3 with a flat right front which really is the most important tire on an oval is a good day. We would have liked to have won but that was the best we had given the circumstances. I can’t thank my team enough for all of their hard work.”

“Not the results we were expecting based on our times in testing,” said Kaiser. “I experienced a few setbacks in race day practice and qualifying, so I had my work cut out for me in the race. We were able to gain one position at the start, but things got too spread out to advance any further. Overall, we gained some valuable experience and will be more prepared for the next oval in August.”

Making his first appearance on an oval track, Rookie José Gutiérrez, 17, driving the #5 Racing for Mexico/Juncos Racing car added another Top-10 finish to the season taking ninth after qualifying eighth for Round 7. The young Mexican stands eight in the Pro Mazda Championship.

“Lucas Oil Raceway was interesting for me because it was my first race on an oval,” said Gutiérrez. “Testing on Friday was a huge help for me to learn how to get close to the wall and understand the throttle management. Qualifying was a little bit difficult because you only had two laps. My first lap was a little slow but my second lap was fast. In the race I had a nice clean start. In the middle of the race I had a lot of understeer and was losing grip. Overall the race went well as I was able to finish ninth and add points to the championship.”

Argentinean rookie Julia Ballario, 22, driving the #6 Pistas Argentinas/Juncos Racing car made her first appearance of her career on an oval finishing just outside the Top-10 in 12th after starting the race in 12th position. Ballario currently sits 10th in the Pro Mazda Championship. “I am very happy with the work we accomplished at Lucas Oil Raceway this weekend,” said Ballario. “It was a positive experience on my first race on an oval. The second half of the race went very well for me as I was able to push myself and gain speed. Thank you to Pistas Argentinas, Argentina Art, my spotter Peter Dempsey and Juncos Racing for all of their support.”

Team owner Ricardo Juncos was pleased with his team adding another podium finish as they continue their battle for the 2014 Pro Mazda Championship.

“We had an overall positive weekend adding another podium finish to the season as we continue to fight for the championship,” said Juncos. “Spencer did a great job keeping the car on track and taking a third place finish after discovering the right front tire had gone flat around 30-40 laps to go of the race. These types of things happen and you cannot control them in racing. Kyle was able to stay consistent and clean for the race. Jose and Julia did a fantastic job in their first appearance on an oval and I am very proud of how well they were able to run.”

The 2014 Pro Mazda Championship Presented by Cooper Tires season returns next month June 28-29th for Rounds 8 and 9 on the 1.7-mile street course at Reliant Park in Houston Texas.

Ryan Blaney's admiration for Tony Stewart goes back to his childhood