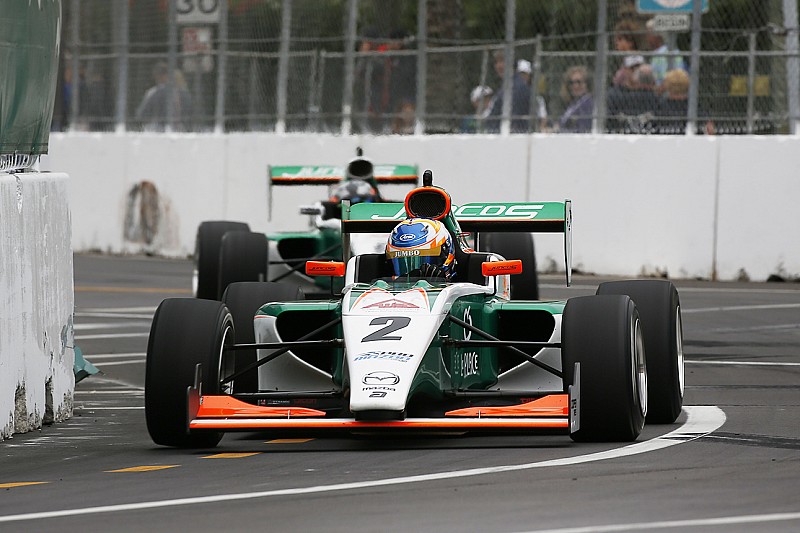 In Pro Mazda’s season-opener with the new spec Tatuus PM-18 Mazda, Oliver Askew and Harrison Scott were pre-race favorites for Cape Motorsports and Italian RP Motorsport Racing, having grabbed the front row spots. However, when each left their braking too late at Turn 1, Parker Thompson in the Exclusive Autosport entry sliced through and into the lead ahead of Juncos Racing pair Robert Megennis and Rinus VeeKay (up to third from eighth). A full-course yellow for Team Pelfrey’s Rafael Martins and Carlos Cunha (another Juncos car) presented VeeKay with a golden opportunity to slingshot past Megennis on the restart, and he took it.

Thompson would likely have gone on to win had not the yellows waved for a one-car incident, James Raven having struck a wall in the DEForce car. Suddenly Thompson’s three second lead over VeeKay had been erased, and on the restart the Dutchman went around the outside of the Canadian at Turn 2 to grab the lead he’d never cede, winning by 0.33sec.

Megennis comfortably held off the recovering Cunha and Askew to claim third, while Sting Ray Robb was sixth with fastest lap in another Team Pelfrey entry.

VeeKay won again on Sunday despite a miscue at the initial start which saw him shuffled back from pole. Officials red-flagged the race and ordered a complete restart, and VeeKay held off BN Racing’s David Malukas to the checkered flag, despite a late caution putting the leading pair together again.

Carlos Cunha, completed the podium, but Askew was the man most likely to threaten the top two. However, he clipped the Turn 8 wall and damaged his suspension, causing him to drop to to seventh.

Scott ran fourth despite a damaged front wing but when it failed altogether he fell right back so it was Robb who slipped past to claim the spot, with Thompson fifth.

Kaylen Frederick of Pabst Racing, who had qualified third, tangled with Igor Fraga of Exclusive Autosport at Turn 1, an incident that also involved the second Exclusive car of Manuel Cabrera.

That left fourth place to another Pabst entry, that of Calvin Ming. Fraga and Frederick clawed back to claim eighth and 11th respectively at the checkered flag.

The second race saw some different names spring to prominence, and one of them was a major throwback. More than four years after winning two races in the 2013 USF2000 championship, Alexandre Baron marked his return with the new Swan-RJB Motorsports team by scoring an impressive victory from pole.

Fraga and Lucas Kohl (Pabst Racing) finished second and third to ensure six different drivers and teams were represented on the podium over the course of USF2000’s two races this weekend.

On Lap 4, Kohl attempted to pass Fraga at Turn 1 but lost a place to a close-following Caroline. Five laps later, Caroline tried and failed with the same maneuver on Fraga but at least maintained third.

However, following a caution period, Kohl sneaked past him to regain the last step of the podium. Kirkwood was fifth ahead of Sierra.