DETROIT — The Chevrolet Indy Dual in Detroit may prove to be a crucial race in the fortunes of Takuma Sato and the ABC Supply Racing team this season. Not because they placed 19th - which they did - but because of how they bounce back from the sharp disappointment felt in its aftermath. 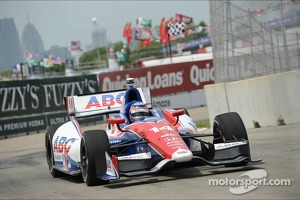 As it stands, Sato is currently fourth in the overall IZOD IndyCar Series championship, trailing new leader Helio Castroneves by 14 points. Sato is still leading Castroneves in the Road Course championship by a single point.

Starting seventh in the first race of the IndyCar doubleheader in Belle Isle Park this weekend, Sato was running sixth when the first round of pit stops began. When Sato was told to stay out another lap instead of pitting on lap 24, the computer readout indicated he had enough fuel to run the additional lap when in fact he didn’t—he stopped on the course.

The error proved costly as Sato lost two laps on the 2.3-mile temporary street course. Believing his race was over, Sato began to get out of the car and then thought better of it. The Holmatro Safety Team towed the No. 14 car back to the pits where the ABC Supply crew filled it with fuel and buckled Sato back in.

On lap 27, Sato rejoined the race in 23rd position as the team was determined to use the final 43 laps as a testing session to learn as much as possible for Sunday’s race. If he could gain spots through attrition, that would be a bonus. The adjusted plan proved effective as the engineers were able to gain information about the car’s performance as the race wore on.

“It was a tough race for us,” Sato said afterwards. “Since we weren't happy with the balance and grip this morning after qualifying [for Sunday’s race], we had to change the setup quite a bit before this afternoon’s race. Once the race settled in, our pace was quite strong, and I was starting to gain positions and moved as high as sixth.

Then we had a fuel error and we were out of gas. We were two laps down by the time we got back on track, but we were able to run both the primary and alternate tires to see how they reacted during the stints so that was good preparation for tomorrow.”

Sato will start 21st in Sunday’s race, based on the morning qualifying session today.

Mike Conway drove to a commanding victory in the Dale Coyne entry; it was the young Briton’s first race since the Long Beach Grand Prix in April when he drove for Rahal-Letterman-Lanigan. Earlier in the day he won the Verizon P1 Award and will start on the pole for Sunday’s race.