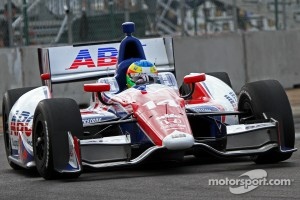 Mike Conway on Mid-Ohio Sports Car Course: “Mid-Ohio is one of smoothest tracks we race on. There are smoother tracks but Mid-Ohio is definitely more enjoyable because of the amount of grip it has—which makes it such a physical track also. It will be interesting putting the red [alternate] tires on for qualifying to see how much grip we’ll have and how much quicker we can go than last year’s pole speed. I’m pretty excited to get them on and get a good feel for it… Mid-Ohio’s a high speed circuit – there are really only a couple of slow corners—turn 2 and the last one. The elevation changes make it really interesting and it’s quite technical in certain areas, so overall, it’s a fun but demanding track.”

Conway on key to running well at Mid-Ohio: “You’ve really got to keep up minimum speed because the circuit is really fast flowing, there are no real stop-start corners. You’ve got to have everything working there—a car that stops well and turns really well. Usual story—you have to find as much grip as you can.”

Conway on recent test at Mid-Ohio: “We found something in the car after Iowa. Since Toronto the No. 14 has definitely been dialed in. We unloaded at Mid-Ohio and the ABC Supply car was good straightaway so we did little tweaks here and there and I think we ended up one of the quickest so it was pretty good. We’ve gotten the Firestone tires to work for us—that’s been the biggest challenge this year is getting the car to really work the tires properly and we’re there now with the setup so we can get some good results the rest of the year.”

Conway on physicality of the race: “This new car is as physical as the old car, and because we are going quicker—we were 2 seconds faster in testing at Mid-Ohio - you have more stresses and Gs on your body. It’s going to be pretty physical but then it always is at Mid-Ohio. It has a lot of high speed corners and the slow speed corners are quite long so the loads on the steering are long too. After that race you always feel pretty beat up, and this year’s race won’t be any different. I’ve been training hard and I’m as prepared as I can be.”

Alfe Hosts Big Brothers & Big Sisters: Alfe Heat Treating, an associate sponsor of AJ Foyt Racing, is providing 50 tickets to the Big Brothers and Big Sisters of Medina and Summit counties to the race this weekend. On Friday, the kids will have a special treat as they can watch the action on track from the Alfe hospitality tent.

ABC Supply roofing customer, Reliable Residential Roofing, located near Lexington, KY, won the ‘Your Name Here’ contest for the Honda Indy 200. The company name will be atop the sidepods of the No. 14 ABC Supply Dallara/Honda. Company supervisors Steve Bowman and Timothy Young will receive selected merchandise, race tickets, hospitality and garage passes, plus a Meet and Greet with A.J. Foyt and Mike Conway.

Michael Wilson, of Chesapeake, Ohio will be the ABC Supply Honorary Crew Member of the race this weekend. An employee with ABC Supply for eight years, Wilson works as a delivery service manager in the Huntington, West Virginia branch.

Mike Conway on his physical training: “I’ve been training hard on the bike. Getting used to those early morning workouts again starting at quarter past 5—it’s a killer the first couple of days. [Note: Conway had been training in England between Toronto and Edmonton] I have to do it then because of the heat in Scottsdale, [Ariz.] so I get my training in before 9 a.m. I usually ride between two and three hours, a three-hour ride would be about 50 miles on the road. At least they’re pretty empty when I start that early.”

Past performance at Mid-Ohio: Conway’s best start is 16th (2009) and he has not finished as mechanical troubles sidelined him in his two starts at the track. Since 2007, the Foyt team’s best start is 7th and their best finish is 4th both of which occurred in 2009 with driver Ryan Hunter-Reay. During the CART years, the Foyt team’s best finish at Mid-Ohio was 2nd in 1993 with driver Robby Gordon (who is now Hunter-Reay’s brother-in-law).