A.J. Foyt Racing this morning announced that he would again expand to a two-car entry for the 2013 Indianapolis 500, and will look to field a car for IZOD Indy Car Series hopeful Chase Austin.

Austin will look to join Willy T. Ribbs and George Mack as African-American drivers to start in the Indianapolis 500, just one year after becoming the first such driver to compete in the Firestone Indy Lights Freedom 100 at the Indianapolis Motor Speedway. 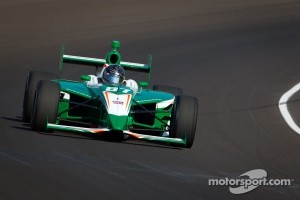 Chase Austin in the Indy Lights car at Iowa

“My son (team director) Larry and I have watched Chase drive and we want to give him a chance,” said Foyt, whose team includes the #14 Honda-powered full-season Indy Car entry with driver Mike Conway and ABC Supply as the primary sponsor. “What I like about him is that he has driven all types of race cars with different horsepower in his career, and I believe that’s important when evaluating talent. He’s done a real good job in the Lights series, and I believe he can qualify for the Indy 500 with Honda on board.”

The partnership was helped along by the efforts of Chris Miles and his Starting Grid Inc., initiative, which has been working for three years to provide more open-wheel opportunities for minority drivers. 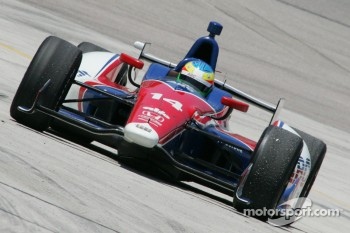 “It is incredibly gratifying for me to have Starting Grid associated with such an American racing icon,” Miles said. “I am extremely proud for Chase to receive this tremendous opportunity to race for A.J. Foyt Racing as well. Chase has performed admirably with his limited experience in open-wheel cars, and I am completely confident in Chase’s ability to settle into the big cars with no problem.”

Austin finished 10th in the Freedom 100 this year and scored a career-best eighth-place run at Iowa Speedway while running at Juncos Racing. The Kansas native started his racing career by climbing in a go-kart at the age of eight, and he has been working towards an opportunity like this ever since. He has competed in stock cars as well, appearing in the Camping World Truck Series as well as the NASCAR Nationwide Series.

“For me to say that I am anything other than excited about this opportunity to compete in the Indianapolis 500 with A.J. Foyt Racing and Honda next year would pretty much be an understatement,” said Austin. “However, at the end of the day, I will have a job to do and that is what Chris and A.J. will be expecting out of me. I cannot wait to spend more time with A.J. When I met with him in Iowa, he started sharing some of the best stories. I really don’t know what to expect come May, but you can bet we will have a lot of fun.”

A.J. and his son Larry having been exploring a number of avenues to grow the long time Indy Car team in recent months, including helping a number of Indy Lights drivers make their way to the grid. The team got two cars in the field for the 2011 Indianapolis 500, but ended up making a deal to give one of its qualified cars to Andretti Autosport when Ryan Hunter-Reay failed to qualify the AA machine.

“Chris approached me about fielding a car for Chase and I talked it over with Dad and we agreed that it could turn into something pretty cool,” said Larry Foyt, Team Director of AJ Foyt Racing. “Chris has put together a marketing program which will reach a new generation of fans, and I think this opportunity will not only be good for Chase and our team, but also for INDYCAR.”