Rookie Conor Daly, who started 31st, drove a solid race in the No. 41 ABC Supply Honda to finish 22nd.

INDIANAPOLIS — This Indianapolis 500 set records for the fastest average speed at 187.4 mph with 14 different leaders generating 68 lead changes but it was Tony Kanaan winning under caution that drew the most cheers. It was his first victory in 12 tries. 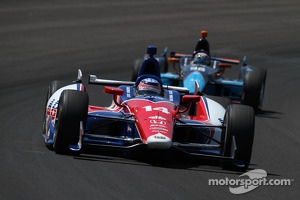 Takuma Sato drove hard for the entire 500 miles in the ABC Supply Honda. He recovered from a spin and two blistered right rear tires to finish 13th. It was Sato’s best finish in four starts here and the ABC Supply team’s best finish since 2008 when Darren Manning placed ninth.

Sato relinquished his point lead to Marco Andretti who finished fourth today. Sato is second in the IZOD IndyCar Series and currently leads the Road Course series championship. In the overall championship, Sato trails Andretti by 11 points, while he remains five points ahead of third place Helio Castroneves.

Rookie Conor Daly, who started 31st, drove a solid race in the No. 41 ABC Supply Honda to finish 22nd despite losing his rear brakes (which made the pit stops an adventure for his crew) and suffering through two small fires during refueling. He ran the entire race—just the fifth oval track of his career--and gained valuable experience in the process.

Starting 18th, Sato began carving his way through the field and was up to sixth by lap 48 of the 200 lap race. However, on lap 57, he lost control exiting Turn 2 and spun, doing a 360 without hitting anything and nearly kept going.

Once the safety team got Sato’s car restarted, Larry Foyt radioed to him to stay out so he could get his lap back while the field pitted under caution. The plan worked as Sato pitted the next lap for fuel and tires but he was at the back of the field in 27th position.

Undeterred, Sato fought his way back through the field again. However, he suffered two blistered right tires, one of which was so severe, he had to pit for new tires earlier than planned by seven laps.

Although necessary, that change in strategy proved costly as his final pit stop on lap 175 required a full load of fuel, dropping him from ninth to 19th. As other cars pitted and the stops cycled out, he climbed back to 13th.

Most cars ahead of him were able to dash in for a splash of fuel and go which cut their stops in half—time-wise—and allowed them to gain positions on track.

“It was a busy race,” Sato said. “I was able to gain positions one by one and we got up to sixth place. It all looked good but we suffered a little on the balance and unfortunately I lost control in Turn 2 and had a big 360 which put us to the back of the grid. So then we had to work our way up through the field again.

There was a lot of overtaking but in a couple of stints we really suffered from lack of grip [the crew determined that the right rear tire had blistered]. We made some adjustments in the pits to try to make the car better but it was really tough. It is disappointing to finish 13th but we raced hard all day.

All the boys did a great job in the pits today and all month long and I appreciate their work. We’re going to keep pushing and keep fighting for the championship. Congrats to Jimmy and TK on their victory.”

Daly spent most of the race vying for position in the back third of the 33-car field.

"I was being conservative, for sure, just trying to get through the field,” Daly said. “I could have been a bit more aggressive a few times. It was unfortunate when we lost the rear brakes, that is what really killed us. It just threw off my whole pit stop sequence and we caught on fire, twice, which was a bit concerning.

We kept going though, it was good in the end because we were able to make it to the finish and 22nd is not too bad from where we started, so, I'm happy."

Daly returns to Europe next weekend to begin testing his GP3 car which he will race at Valencia, Spain in mid-June.

Sato and the ABC Supply team journey to Detroit’s Belle Isle from Indianapolis later this week for the first of three double-headers this season. Both of next weekend’s races on the picturesque temporary circuit are paying full points.

Foyt looking to put more pressure on his drivers