Alfe Heat Treating, Greer and Housby return for 2013 with A. J. Foyt Racing and Takuma Sato in the No. 14 ABC Supply Honda. 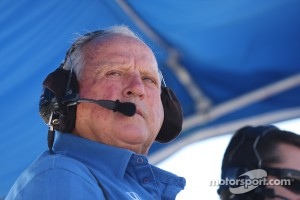 Alfe enters its third year of involvement with the Foyt team and plans to leverage the association to an even greater degree this season.

“We found there’s a lot of excitement within our sales and marketing department about the opportunities to improve exposure to customers,” said Kurt Westman, President of the heat treating services company with headquarters in Ft. Wayne, Ind.

“We’re really looking forward to Indy this year—that’s a big race for us—and getting more customer involvement,” Westman continued. “Last year we focused predominantly on our Indiana customer base and now we’re realizing we’ve got a lot of customers who are very excited about Indy that are outside of our Indiana markets—Michigan, Ohio and even North Carolina—so I’m sure we’re going to see some presence from those customers in those states as well.

“We’re also looking at bringing in some charitable organizations and making them part of our race season activities. Charitable activities have always been part of Alfe’s culture and utilizing the Indycar events that are close to our facilities is something we want to do. We did a little bit of it last year and found out that it worked very well, we had very good attendance and it was very good for our employees who were involved with that aspect of it as well. So that’s important to us.”

Asked why he continues to support AJ Foyt Racing, Westman paused a moment and then replied, “Indy was a big part of my life growing up, my dad was a big Indy fan and, interestingly a big A.J. Foyt fan, and I became one at a very early age as well. Working with A.J. and Larry his son has been extremely rewarding, they make you feel part of the team, so I think that’s what brings me back. The whole organization here--everybody in the crew—anytime we bring our people around, they make them feel at home which is obviously very good for our relationship with our customers and it’s what makes us feel so fondly about Foyt Racing.”

While Alfe is a relative newcomer to motorsports sponsorship, Jim Greer, President of Greer Enterprises in Houston, has the distinction of being A.J.’s longest running sponsor. His relationship with Foyt dates back to the early 1950s when A.J. began his professional driving career. What began as a close friendship with Foyt’s father Tony turned into a lifelong friendship with A.J. “Jimmy is like a second father to me,” says Foyt about his longtime friend and supporter.

Jack Housby, owner of Housby Trucking in Des Moines, Iowa, has known Foyt since the 1960s when the two men were competitors in NASCAR—Foyt as a driver and Housby as a team owner. No longer competitors, they became good friends. Housby supplies the tractor which hauls the ABC Supply Racing trailer to the races.

Takuma Sato will test the No. 14 ABC Supply Honda Indy car at Sebring (Fla.) International Raceway on Tuesday, February 19 as the team prepares for the season opener in St. Petersburg on Sunday, March 24.

Legge speaks out on her termination from Dragon Racing