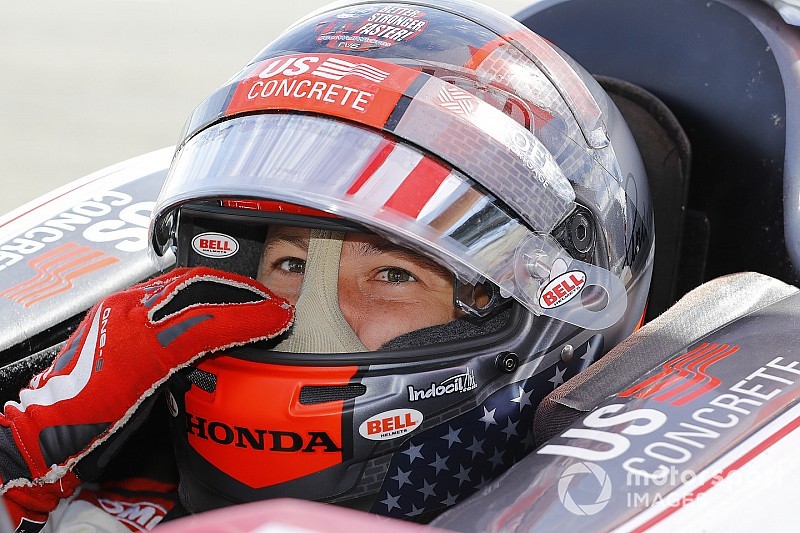 To win the Indianapolis 500 on the 50th anniversary of his grandfather’s sole victory at the Speedway would reduce Marco Andretti to tears, he has admitted.

Like his father Michael, Marco regularly impresses at the Speedway, with five top-five finishes there – none closer than in his rookie year of 2006, when he was beaten to the checkered flag by Team Penske’s Sam Hornish Jr. by just 0.0635sec.

With Michael Andretti becoming famous for his wretched luck at Indy – he holds the record for most laps led without winning, and has led one more lap at IMS than four-time winner Rick Mears – Marco’s near-misses have further embellished the myth of the ‘Andretti Curse’.

Thus Andretti agreed that winning the Indy 500 on the 50th anniversary of his grandfather Mario taking the only win for the family at IMS, would be extra emotional.

“But it would be amazing.”

Now in his 14th year in the NTT IndyCar Series, Andretti said that his attitude at Indy in May had changed.

“I used to stress and lose sleep – today was good, today was bad – and none of that matters. Sunday matters.

“OK, qualifying matters because there’s points but it doesn’t matter to the race. I’ve started on the front row, I’ve started toward the back, but it’s about Sunday, having a good Sunday.

“So now I stress less during the month.”

Andretti said that an Indy 500 success was not his only aim for this year, however, and is targeting a non-oval triumph

“Last year I said I wanted a street course pole, and we were able to do that [in Detroit] but this year I want a road or street course win, for sure.

“We’re one good Sunday away from winning the Indy 500 – that would be amazing. But it would be nice if we had more than one win this year, basically capitalize on the ones that we’ve been in the hunt to get.”

Mark Bryant has replaced Nathan O’Rourke as race engineer on the #98 Andretti-Herta Autosport-Honda entry, and Andretti says he’s aiming to work a different way from now on.

“Being a veteran now, it’s easy to get too in tune with any aspect of the car. I need to step away and just drive the car. The reason you see so many fast rookies is because ignorance is bliss sometimes, when you’re just coming in and saying what the car’s doing and the engineer’s fixing it.

“But it’s tough as a veteran to not have preconceived notions of what a change to the car is going to do… I need to remove myself and actually do less of the engineering stuff.

“So this engineering change [with Bryant] is good – he just says, ‘Tell me what the car’s doing and we’ll fix it for you.’ It’s a cool feeling; it’s less pressure. I can just go back to driving the car. The communication part is huge. It sounds funny, in that it’s simple but it’s hard, you know?

“He’s studied my style, he’s had a lot of ideas already of how he can help me, he knows some deficits I need to work on in my game and he knows that if we focus on those areas with the racecar, then hopefully we’ll be quick enough in the other type of corners to overcome that.”

Too sensitive in fast corners

Asked if he could reveal where he feels his deficit is to the team’s more usual pacesetters Alexander Rossi and Ryan Hunter-Reay, Andretti: “If I had to pick globally, it would probably be high-speed corners – learning to trust what [the car] is going to do there.

“Last year at Detroit, I remember being sixth in practice, having a little lift in a corner, and coming in and saying, ‘Don’t change the car. We’re on pole if I can execute.’ That helps me when I know what I have, so changing the car less is big for me, and that’s a new approach this year.

“Fast corners, I’ve got to work on myself in trusting the car, because I’m super-sensitive. Those guys subconsciously drive around issues and they’re fast but I feel a lot of things and I react to them. There’s positives to that because I can get up to speed quick, flat [throttle] straight out of the pits and things like that… It hasn’t gotten me an Indy 500 win! But it’s a good thing at some points.

“But being overly sensitive is not, because you overreact when you shouldn’t sometimes. But that’s how I finish a lot of races – I stay out of a lot of trouble.”