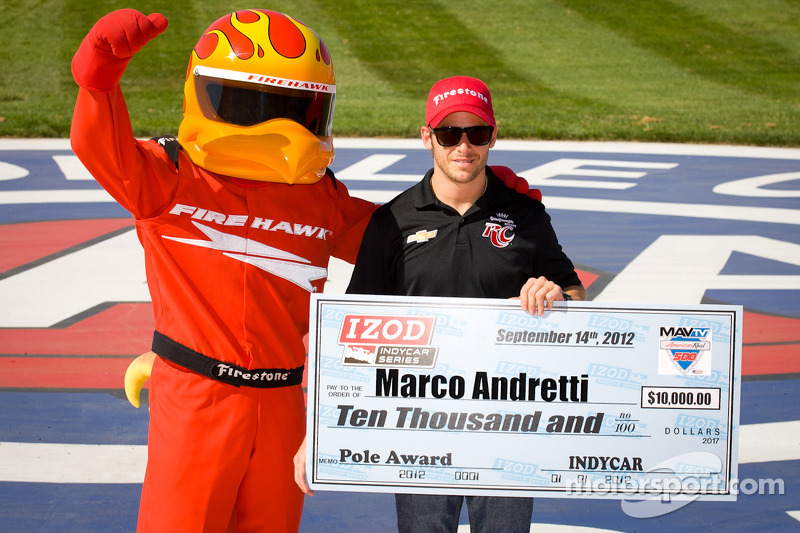 Normally, speedway qualifying is about as interesting as watching grass grow. There are exceptions, of course. There’s Indy with its Pole Day, Fill Day, and Bump Day all with the occasional drama we have come to know from all those days over the year. And then there are 500 mile races in general. The race tomorrow will be the first 500 mile race by IndyCar (or IRL or CCWS or CART) outside Indianapolis in a decade. So today’s qualifying was especially interesting without considering the added elements of sweltering heat and a night race. The IZOD IndyCar Series qualifying took place from 2:15 to 3:45 PM and it was time to hold on to your seat!

If we take a quick look at that last 500 mile race here in 2002, the field was much smaller due to the slowly dwindling car counts that were part of the 2000’s before 2008’s “mergification”: there were only 18 of them. Yet, 5 of those drivers qualified today: Scott Dixon, Dario Franchitti, Tony Kaanan, Oriel Servia, and Alex Tagliani. And all qualified well.

One of the 18 drivers, Bruno Junqueira, raced in the series last week in Baltimore as a replacement driver. And, two of those drivers, Michael Andretti and Jimmy Vasser, are team owners here today. One of them, Vasser, is considered to have run the fastest 500 mile race in history that day in taking that win. The other is the father of today’s polesitter, Marco Andretti. This shows a remarkable continuity and also career longevity, in American open wheel racing.

Marco Andretti ran an impressive average speed of 216.069 MPH in his qualifying run. As he told us, “I had my mind made up, that I was going flat, and I did. But I should have gone for the “lazy lift” on lap 2, just committed to lifting. Instead, I committed to going flat and had to bail out big time”. 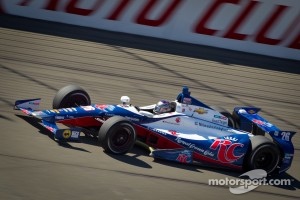 Andretti mentioned his disappointment with his results in the 2012 season. It’s inspired Marco to work harder where he needs to, and he mentioned his set ups on street circuits as an example. But make no mistake, “we’re definitely showing up here to win”.

Second place, barring an engine penalty, will be Will Power’s teammate, Ryan Briscoe. He admitted that he “had a little help from Will’s run further down the line from me”.

The championship contenders will not start anywhere near the front. Points leader Will Power driving for Team Penske qualified third. However, he has one of those 10 space grid penalties for changing his engine, so he will actually start 13th. Second place driver Ryan Hunter-Reay fared even worse, qualifying 17th and also having a grid penalty which should place him last, or according to RHR, “starting outside the track”.

Two drivers were not able to qualify due to either engine changes or car repairs – HVM’s Simona de Silvestro and Dale Coyne Racing’s Justin Wilson. They will also be at the back of the grid.

Of note is driver Mike Conway’s decision to withdraw from the race and his replacement will be Wade Cunningham. I don’t know quite what to make of Conway. Other drivers expressed respect and admiration for his candor, but racing is a business. It remains to be seen whether an owner like A.J. Foyt will re-sign and driver who pulls out due to concerns about his own wellbeing.

The green flag will wave tomorrow at 5:50 PM Pacific Time. The drivers promise a great show!

Story by: Lisa May Davidson

Will Hunter-Reay’s decision be a bigger story than the Championship?

Hot & Slick: Championship fights to be played out in Fontana