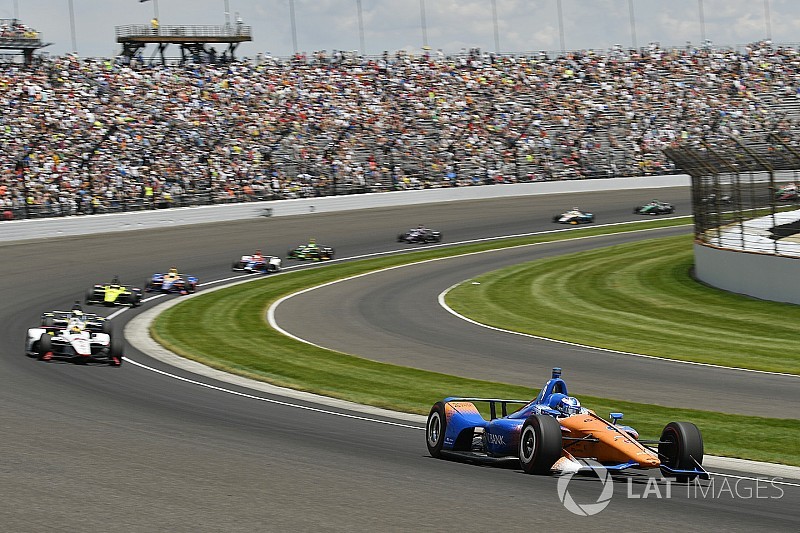 A brave fuel gamble that involved him completing 40 laps in the final stint had a chance of working out for Scott Dixon, but the Chip Ganassi Racing-Honda driver was unable to accelerate hard after the caution periods.

Dixon dropped as low as 14th in the race, but became a factor when he stopped on Lap 160 at the end of the sixth and penultimate caution period.

Dropping to the tail of the field, the 2008 Indy 500 winner and four-time IndyCar champion saved fuel in the draft, and as the others peeled off their green-flag stops, he rocketed up the order.

Although he was subsequently passed by Power, fuel became less of an issue when another caution flew, this time for Tony Kanaan’s crash on Lap 189, and on the final restart with seven laps to go, he tried to pass the eventual winner, but wasn’t far enough up the inside at Turn 1 to make the move stick.

“The first and second gear just seemed to be way out of sync to the pace of what everybody was restarting,” said Dixon. “First we were on the limiter, second I was like a sitting duck, wouldn't accelerate – gear was way too long.

“We lost a lot of positions in that scenario. But the car felt pretty good. It was consistent. It was good in traffic.

“It was very difficult to pull off passes today. So for me, to be honest, huge credit to the team. They did a superb job of trying to pull off that strategy. Obviously we got very lucky with that caution for TK, which was enough to give us a bit of a window to get to the end.

“I think we were put in a pretty good position there at the end. We tried to figure out whether to keep going and hope for a yellow or try hard to save a bit of fuel. That's why I let Will pass.

"A few guys [Stefan Wilson, Jack Harvey, Oriol Servia] that couldn't make it at all. It was definitely interesting."

Dixon suggested that IndyCar needs to look at the downforce levels for superspeedways. Despite 30 lead changes, there were long periods in the first half of the race where the cars were running around 1sec apart, unable to get near because of dirty air and tire degradation.

“I don't know how to do it,” said Dixon. “The downforce level is maybe not necessarily the issue. If the guy in front fumbles a little, but is still behind the car in front, he sucks up that you can't pass him.

"It's almost like the cars need a little more drag to make that happen or maybe a little bit of downforce so you can stay closer, utilize it. Seemed like you had to come from quite a long ways back. Even when I got into a scenario with a clear track, slow competitors in front of us, it was very tough to get a run.

“It won't take much. It will just be a little tweak to help that out. Yeah, I think even from the tire you could do something there, too. The car is pretty tricky. It seems like you get a lot of understeer.

"If you get high on the car in front of you, it can snap around pretty quickly. I didn't have an issue with the rear of the car today."