Balancing act for Briscoe between Pocono and Lime Rock

INDIANAPOLIS, Ind. - (July 1, 2013) – The Fourth of July weekend is going to be an eventful one for National Guard Panther Racing driver Ryan Briscoe, who is slated to sandwich an ALMS race at Lime Rock Park in between testing and competing in Sunday’s Pocono IndyCar 400. Briscoe, who tested the team’s No. 4 Chevrolet at Pocono last Tuesday upon returning from the 24 Hours of Le Mans endurance race, will miss Saturday’s on-track action and not make a qualification attempt for Sunday’s 160-lap event. 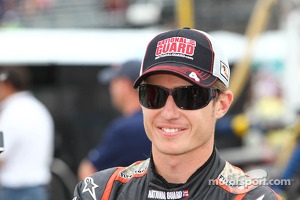 "It will be a busy weekend between racing the National Guard Chevrolet at Pocono and the Level 5 car at Lime Rock,” Briscoe said. “It’s great that Panther is giving me the opportunity to race at Pocono even though I won't be here Saturday for practice and qualifying. Fortunately, I will be able to prepare the car for the race and it was a big bonus having the test day last week and then the open test on Thursday to get as much track time as possible.”

Sunday will mark Briscoe’s fourth start in the No. 4 National Guard Chevrolet and the race will be Panther’s first career start at Pocono’s “Tricky Triangle” – a unique tri-oval where IndyCars last competed in 1989. Following Thursday’s test at Pocono Briscoe will resume his driving duties with Level 5 Motorsports in ALMS, and will travel to Lime Rock Park in Lakeville, Connecticut to compete in Saturday’s Northeast Grand Prix, which will be broadcast on ESPN2 at 3:00 pm (ET).

“Last week we spent our time working on our race prep and we worked hard on trying to find something that will get us through the field during the race on Sunday,” Briscoe continued. “Pocono’s a big track and it’s a long 400-mile race, so we feel plenty confident even having to start in the back. I know the National Guard crew will work hard, and with all the track time we’ll have on Thursday, we can get to the front."

Panther will be running a special red, white and blue National Guard livery in honor of the Fourth of July weekend that also highlights the 150th anniversary of the Medal of Honor. Panther hosts many Medal of Honor Recipients as part of its “Operation: Hire Our Guard” veteran employment program, and former Marine Capitan James E. Livingston, who received the Medal of Honor for his heroic efforts in the Vietnam War, will be a guest of the team this weekend.

“This is obviously a big weekend for us with it being the Fourth of July and we’ve got some important guests that will be attending the race, so we’re looking forward to getting to Pocono on Wednesday and getting to work,” Panther Managing Partner John Barnes said. “I’m not concerned about missing qualifying and having to start in the back of the field; Pocono is a big place and we’ll have 400 miles to help Ryan work his way to the front. This is the first time we’ve had an extended period of time to test with him and that will pay off for us on Sunday.”

The balancing act between ALMS and the IndyCar Series is nothing new to Briscoe during the 2013 season. The 31-year-old captured a P2 class victory in the 12 Hours of Sebring before returning to IndyCars with Ganassi Racing for the 97th Indianapolis 500 in May. He made his first two starts with Panther Racing the following weekend in the Chevy Duel in Detroit and during his last start with the team at Milwaukee he had to travel back and forth from France where he was preparing for the 24 Hour of Le Mans.