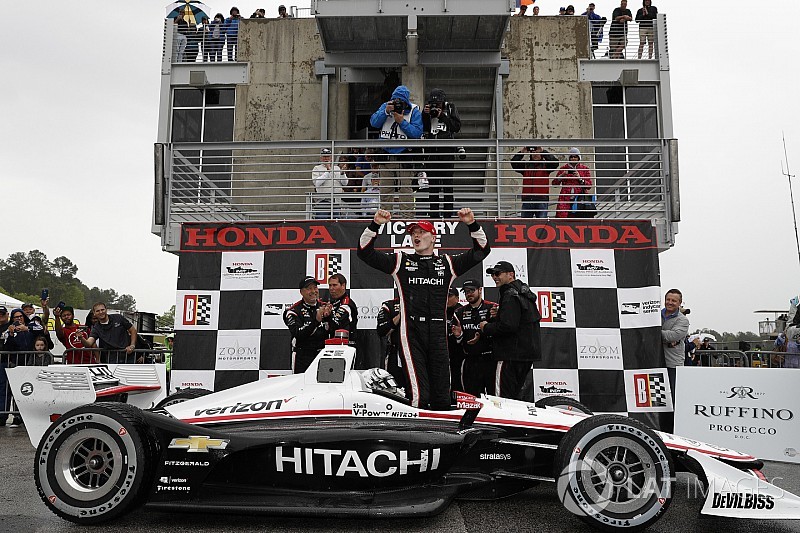 Team Penske-Chevrolet driver Josef Newgarden scored his second win of the season and his third in four years at Barber Motorsports Park, despite a late shower throwing a curve-ball in the restarted race.

The reigning champion took it easy on the slick surface in the closing laps, but still beat Andretti Autosport’s Ryan Hunter-Reay and Schmidt Peterson Motorsport’s James Hinchcliffe by 10 and 15sec respectively.

The brave gamble from Sebastien Bourdais and Scott Dixon to make the 75-minute remainder of the race on only one stop was ruined by the return of rain, obliging all runners to stop for wets.

The single file restart was drama-free and Newgarden led by 1.5sec at the end of the first (27th) lap but the following lap Pagenaud got around both Rahal and Andretti, and a couple laps later Pigot and the two-laps-down Zachary Claman De Melo slid off together.

Newgarden had streaked away to a five-second lead, and second-placed Bourdais was under hard pressure from Hunter-Reay until Lap 35, whereupon the Frenchman started pulling away.

Jones was first of the top-10 runners to stop, and it allowed the off-strategy Pagenaud into 10th, while Wickens moved past Veach and into the top six with a smooth pass up the inside at Turn 5 on Lap 41.

A lap later, Dixon got around Sato for eighth and zoomed onto Veach’s tail, who wiggled through Turn 3 on Lap 45 and allowed Dixon a simple pass into Turn 5. Two laps later Veach also fell victim to Sato and Pagenaud.

By now, Newgarden had stretched his lead over Bourdais to 12sec, and it seemed nothing was going to stop the reigning champion today other than his pitcrew, that swung into action on Lap 50 and put him on new primary tires. The current championship leader, Rossi, however, had slipped behind the SPM cars of Hinchcliffe and Wickens when he stopped.

Bourdais pitted from the lead on Lap 55, while Dixon went a lap longer but was back down in ninth, as the team wrestled with a pit speed-limiter issue.

Following the full cycle of stops, Newgarden had an almost absurd 25sec lead over Bourdais (on alternate tires) who had Hunter-Reay 2sec behind, with Hinchcliffe desperately trying to hold off Rossi (alternates) for fourth, with Wickens 6sec back, chased by alternate-tired King and Pagenaud, Dixon and AJ Foyt Racing’s rookie Matheus Leist.

On Lap 63, Dixon dived past Pagenaud for eighth and as rain started to spit down and the track’s ‘weepers’ started to seep, King slid wide exiting Turn 1 and Dixon was all over the ECR car and into sixth.

The reason Dixon was sixth rather than seventh was because Rossi, going for a two-stop strategy, dived very early into the pits to take on black tires.

Team Penske president Tim Cindric called Newgarden to the pits for wet tires on Lap 71, and Pagenaud and Leist also pitted. Hunter-Reay, still on slicks, was able to pass Newgarden who was desperately trying not to shred his wets while the track was still reasonably dry.

There were 12 minutes left and new leader Bourdais was clearly trying to run to the end on slicks, while Hinchcliffe stopped for wets, and Hunter-Reay and Wickens did likewise with fewer than 10 minutes remaining.

The slick-shod Bourdais had an 11sec lead over Newgarden, and Dixon, also on slicks, was 11sec behind the Penske driver. But then Dixon could stand it no longer and stopped, and Bourdais – with his lead whittled to four seconds, pitted for wets one lap later.

Newgarden now had an easy lead of 19sec, over Hunter-Reay, which he let dissipate by half over the remaining laps. Hinchcliffe and Wickens scored a 3-4 for SPM, while Bourdais held off Dixon by 0.081sec in a sprint to the finish.

Rahal and Sato were seventh and eighth ahead of Pagenaud and Andretti, while Rossi spun down to 11th in the closing stages and relinquished the championship lead to Newgarden.