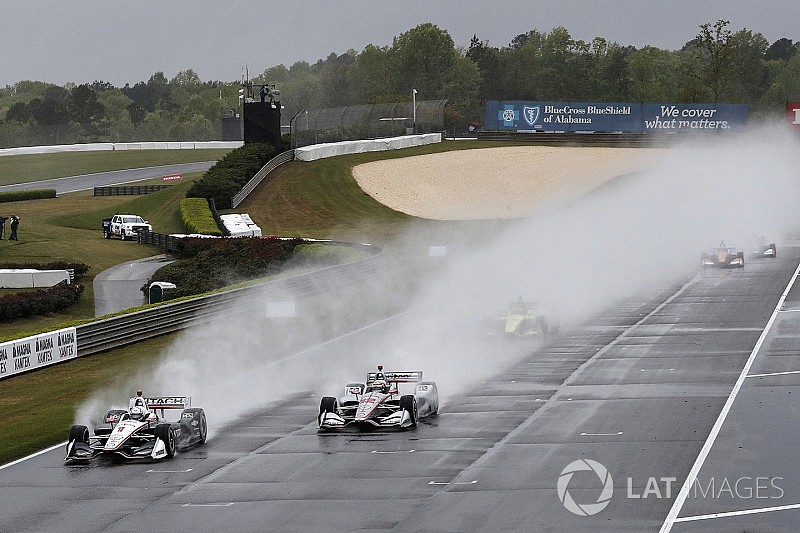 The Grand Prix of Alabama has been halted early after excess standing water caused Will Power to spin and several drivers to complain they were down to zero visibility. An attempt at a restart failed because of water-logged patches.

From the start everyone behaved themselves in a very loose double-file getaway, Josef Newgarden’s Penske-Chevrolet leading teammate Will Power, Sebastien Bourdais in the Dale Coyne Racing-Honda and Ryan Hunter-Reay fourth for Andretti Autosport-Honda.

The significant changes behind were the Chip Ganassi Racing-Honda of Scott Dixon and the Andretti cars of Alexander Rossi and Marco Andretti vaulting James Hinchcliffe’s Schmidt Peterson Motorsports-Honda. However, Andretti then spun on the third lap while trying to get around Rossi. He rejoined in 21st.

By Lap 4, the reigning champion Newgarden had a lead of five seconds over Power although the Australian started to peg it back thereafter, while edging away from Bourdais. However, once the gap dropped to below 2.5sec, Newgarden put on a spurt to stabilize it.

The full-course caution flew on Lap 12 for Charlie Kimball spinning on the exit of Turn 16 – with help from Ed Jones’ Ganassi car – getting into the tire wall at 17, and then coming to a halt on track at Turn 6.

When pitlane opened, Simon Pagenaud (running ninth for Penske), Zachary Claman De Melo (Dale Coyne), Andretti, Max Chilton (Carlin), Rene Binder (Juncos) and Matheus Leist (AJ Foyt Racing) took the opportunity to stop and switch to an alternate strategy. Pagenaud and Andretti would lead these early stoppers on the restart, but down in 16th and 17th, but by now the rain was coming down harder.

On the restart, Newgarden almost lost it on a big puddle, while Power did lose it – hydroplaning and spinning despite radically short-shifting as Bourdais came by. Miraculously Hunter-Reay avoided the wayward silver car, but Power was a passenger as the car looped across the track and his left wheels slammed the pitwall. He was out on the spot, and two laps later the race was brought to a halt.

Power afterward said he “couldn’t believe the race was restarted in those conditions.” Graham Rahal told Paul Tracy on NBCSN that the newly powerful underwing on the 2018 aerokit was throwing excess water into the air.

The 21 remaining cars sat on pitlane with drivers remaining in the cockpit, but following an attempt at a restart after 35 minutes, the convoy returned to pitlane after five laps.

Josef Newgarden told Robin Miller of NBCSN that the high-speed sections were the worst, while pace car driver Oriol Servia admitted he had a couple of major moments in the pace car at just 60mph.

IndyCar is aiming to send the cars back out at 4.30pm local (Central) time.