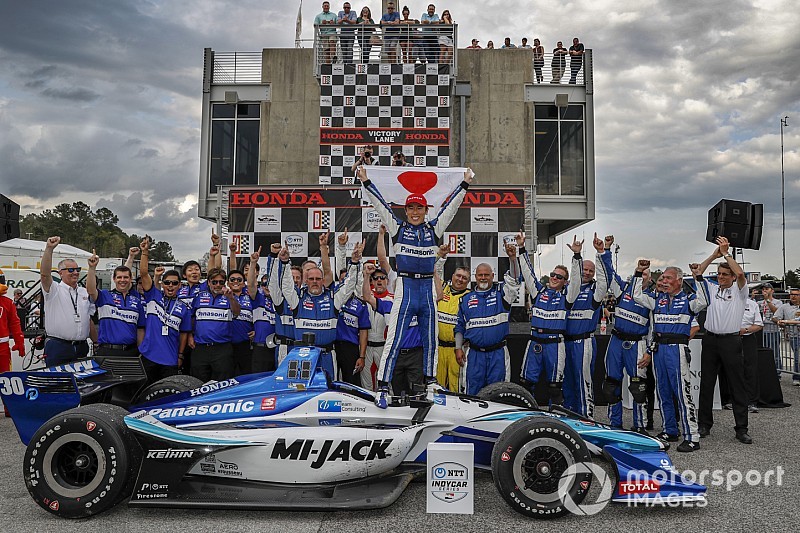 Takuma Sato scored the fourth victory of his NTT IndyCar Series career at Barber Motorsports Park, surviving a major off-course excursion in the closing laps to hold off Scott Dixon and Sebastien Bourdais.

Rahal Letterman Lanigan Racing-Honda driver Sato left everyone behind when it mattered, and had a comfortable lead and beat Dixon by 2.4sec at the checkered flag.

Bourdais got up to second running a brave two-stop strategy but he fell behind Dixon when everyone pitted simultaneously following a full-course yellow.

Polesitter Sato made a strong start to lead the first lap by almost a second as teammate Graham Rahal was fully occupied keeping Dixon behind him. Ed Carpenter Racing-Chevrolet driver Ed Jones made an astonishing start from 21st on the grid to sprint past 17 cars and briefly run fourth before he was unsurprisingly assessed a drive-through penalty for a jumped start.

Team Penske-Chevrolet’s Will Power fell to 10th, but then managed to depose Hunter-Reay on Lap 6. His teammate Newgarden pitted on Lap 9 to change from new blacks to reds, while Power also stopped just a couple laps later, switching from used reds to new reds, and their teammate Simon Pagenaud went from blacks to reds.

By Lap 15, Power was 11th and leading the cars that had already stopped. His nearest competitors were Newgarden, Hunter-Reay, Ericsson in the second Arrow SPM car, Santino Ferrucci (Dale Coyne Racing-Honda), Pagenaud and Rosenqvist.

Hinchcliffe got serviced on Lap 19, Rossi on Lap 20, leaving Bourdais up front in the DCR car with a 6.5sec lead over Pigot and 10.5 over Jack Harvey. Sato ran fourth with Dixon still filling his mirrors, both cars on black primary Firestones.

Rossi’s stop for reds had slotted him in eighth between Power and Newgarden, and Rossi had to work his cold tires hard to keep Newgarden in his mirrors.

Sato and Dixon moved up to third and fourth ahead of Harvey on Lap 24, and ahead of Pigot on Lap 25, while on that same lap Rossi demoted Power to eighth using his much fresher reds to perfection. A lap later, Power spun exiting the penultimate turn, giving up several positions and necessitating a pitstop.

On Lap 29, Bourdais pitted from the lead on what was clearly a two-stop strategy, while Pigot and Harvey followed suit, but the Meyer Shank Racing SPM-Honda driver was assessed a drive-through penalty for speeding in pitlane.

Thus Sato moved into the lead, leading Dixon by 4.2sec, with Hinchcliffe the same distance further back but with Rossi up his tailpipe. Hunter-Reay claimed fifth from Newgarden around the outside of Turn 5 on Lap 32, and it prompted Newgarden to stop for a fresh set of primaries.

Herta, who had tumbled down the order with low fuel pressure, finally pitted on Lap 31 and retired.

Hunter-Reay, Rosenqvist, Pagenaud and Ferrucci stopped on Lap 36, while Sato pitted from the lead on Lap 37, leaving Dixon up front for one lap before he too was called in and handed the lead to Hinchcliffe who still had Rossi just one second away.

Ericsson deposed Newgarden and Power on successive laps at Turn 5 and moved the #7 into the top 10. Just three laps later he got past Pigot who was working to make a two-stop strategy work.

Hinchcliffe stopped on Lap 39, Rossi ceded the lead on Lap 40, and so Sato moved back into top spot, seven seconds ahead of two-stopping Bourdais who was just clinging on ahead of Dixon and the closing Hinchcliffe. On the outer fringes of the Top 10, Newgarden passed Power and Pigot on successive laps to take eighth, but he was 9sec down on the flying Ericsson.

Power, with eight laps older tires than Pagenaud, couldn’t hold off his teammate and fell to 11th before stopping on what was now going to have to be a four-stop strategy.

Up front on Lap 53, Sato was leading Bourdais by seven seconds who was able to keep out of reach of Dixon, who was now under pressure from Hinchcliffe and Rossi. A further 13sec back, sixth-placed Hunter-Reay was being stalked by Ericsson.

Rahal suddenly ground to a halt on the back straight, while Tony Kanaan and Max Chilton collided as they came into the pit entrance, and it sent the Carlin Racing-Chevrolet into the tire barrier. Race director Kyle Novak delayed the full-course caution and allowed drivers to pit, negating Bourdais’ two-stop strategy as everyone pitted together and he missed out on pitlane.

After the stops, Sato led Dixon, Bourdais who was on new reds and with 171 push-to-pass seconds left, Hinchcliffe, Rossi, Hunter-Reay, Ericsson, Newgarden (on new reds), Pagenaud and Power. Pigot was made to drop to the rear of the pack after an unsafe release in pitlane. The drivers behind had stopped again to top off before the restart on Lap 65.

The lapped Matheus Leist helped Sato escape at the front as he lay between the leader and Dixon and proved very reluctant to allow the pack through.

Newgarden, who had gotten around Ericsson on the restart, managed to pass Hunter-Reay for sixth around Turn 15, and Ericsson went around Hunter-Reay at Turn 5 to claim seventh and up ahead Newgarden pushed Hinchcliffe down to sixth.

On Lap 85, Sato outbraked himself at the Turn 8-9 chicane and went flying through the dirt, but held a comfortable enough lead over Dixon to retain the lead and he went on to complete the 90 laps without issue and to win by 2.3874sec.

Dixon worked hard in the closing laps to beat Bourdais by less than half a second.

On Lap 87, Newgarden made a tire-smoking pass down the inside of Rossi at Turn 5 to grab fourth in an excellent drive that keeps him 27 points ahead of Dixon in the championship.

Hinchcliffe closed on Rossi but fell half a second short, while Ericsson got a solid seventh ahead of Hunter-Reay and Pagenaud. Power ran out of fuel on the penultimate lap, handing 10th place to Rosenqvist.