Behind the Barriers: Day two at Indy

Bruce Ashmore was on pit lane Saturday lobbying for the BAT Engineering design for the 2012 IndyCar. BAT Engineering is one of five manufacturers that submitting proposals for the new car. Ashmore, the former Lola chief designer and Reynard North ... 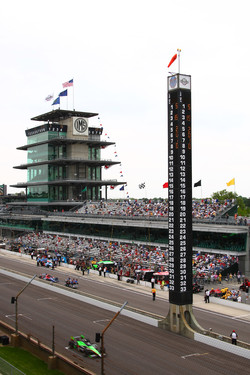 "I'm here this month convincing teams that we're the right group, that we're coming up with the right design," said Ashmore. "The car design we've come up with we think will fit every racetrack that the IZOD IndyCar Series goes to. It will be safe and strong and put on a good show here at Indianapolis."

At the end of the second rookie session all rookies had passed their orientation program except Sebastian Saavedra, who completed two phases before encountering a fuel pump problem. Savvedra was able to return to the track during the open practice session for all competitors, completing the final two phases shortly afterward. All veteran drivers taking refresher tests passed.

Sarah Fisher is one of five women who will attempt to qualify for the 94th Indianapolis 500. Fisher No. 67 is nicknamed Old Faithful. "It's an '03 car that I raced here in 2008 and '09. She's a solid car,' Fisher added. The team also has two '09 Dallaras with Jay Howard driving the No. 66 Sarah Fisher Racing entry

Facebook and Twitter fans were the first to hear the news about Alex Tagliani's health and a recent visit to hospital. Today FAAZT Race Team General Manager Rob Edwards talked today about Tag's bout with bronchitis, and the status of the team's second entry, for driver Bruno Junqueira. "Alex is doing better," Edwards said. "Every day that goes by, he's getting better and better. We hadn't planned to run yesterday. We hope to get out there today to get the car shaken down. Then the rest of the week, we should be in good shape with Alex's program." Tagliani completed 19 laps today.

Plans for the second FAZZT Race Team car entered for Junqueira have not been finalized. "Bruno is racing in Brazil this weekend," said Edwards. "The plan wasn't for him to be here until Monday or Tuesday, anyway. We had the car prepped. It made sense to get the car here. We're hoping we can run him, but we still don't know at the moment. We'll see how it plays out."

J.R. Hildebrand, who was working towards a ride in the AFS Racing No. 27, has been spending time with his colleagues at Andretti Autosport. The No. 27 has been withdrawn from the entry list.

Castroneves quickest on Sunday at the Brickyard