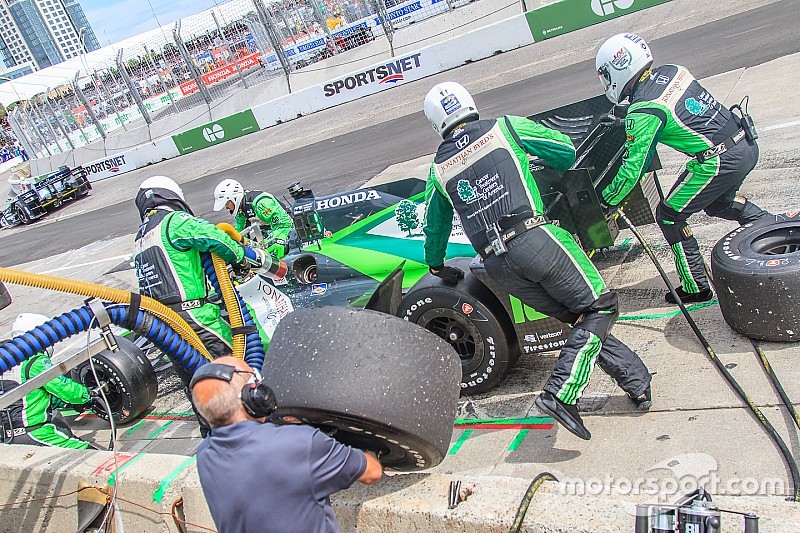 Motorsport.com's René Fagnan had the chance to be part of the pit crew of an IndyCar team during the recent IndyCar race on the streets of Toronto.

The idea was to get a feel for being part of an IndyCar team, so how about changing tires? I'm not talking about changing rubber on a static Indy car, but doing it for real, under tremendous pressure during the qualifying session and the race.

We quickly found an arrangement with Dale Coyne Racing and I was integrated to the pit crew that services the No. 18 car driven by American Conor Daly.

Just six men over the wall

As a tire chaser, my job was quite simple. Unlike Formula 1 pit stops where up to 20 people are involved, only six people – wearing fireproof gear - are allowed to go over the wall when an Indy car stops. Five other crew members stand on the other side of the wall and pass on equipment and retrieve tires. If an authorized seventh person goes over the wall, the team gets penalized.

I would work with Otavio – a hard worker built like a rugby player. His job was to change the left rear tire. He tells me what I have to do: put the new tire on the pit wall, and once the car stops, I put the tire down beside him on his left and then rush to his right to retrieve the used tire and pull it over the wall. Sounds simple.

We don't practice at all, however. My first experience comes during the qualifying session. I'm a little nervous, because there's very little room to pass that fat rear tire, and my head is stuck against the refuelling hose. One last thing: the wall is not straight but angled, forcing me to adopt a not-quite-ergonomic position.

The qualifying session gets underway and Daly stops, and I get my first try at it. Everything goes well, but I shred the skin of my forearms and my knees against the rough concrete surface - what a mess. I need to revise my position. The rear tire is not that heavy, but it's big, quite hot, and not easy to manipulate.

One stop after the other, my technique improves. But during one stop, the old tire that Otavio has removed bounced and started rolling out of control! As fast as a cat, he jumps and gets the escaping tire. The dark look he gives me says everything. “You need to be quicker to get the old tire,” he tells me.

Sunday is race day. With a team radio and a headset, I am in the heart of the action. I can hear Michael Cannon, Daly's race engineer, give instructions to his driver. “Slot 4 for the start. Go brown. Montoya has 4 push-to-pass left. Go black. How's the balance?”

Suddenly, I hear THE call. "Ok guys set 9, get on the wall." I garb the big rear tire with the number 9 written on it. Now, it's pure adrenaline. We all listen to Cannon's warnings. “OK guys, he's in the last turns ... He enters the pit lane."

Because the pit lane is curved, Daly needs to steer his Dallara really close to the wall. The overheated race car stops a few feet away from me. I put the new tire on the ground as Otavio gets into action with the air gun. I jump to his right but again that awful old tire bounces out of my reach. Luckily, Otavio is fast and he tackles the tire in a blink of an eye. I feel bad about the incident that cost Daly a few additional seconds.

The second pit stop is well executed. However, Todd, number one mechanic on Daly's car who's also the right front tire changer, sees that James Hinchcliffe – whose pit box is located just behind Daly's – is ready to start. He stops Daly, but then Ryan Hunter-Reay enters the pit lane, resulting in a lengthy stop for poor Daly. You can relive the action on this video provided by the team.

Daly stops again later for fuel only. He and Cannon took a gamble that the extra fuel onboard would get him to the end of the race. This strategy would have work if a full course yellow had not ruined everything just a few laps from the end, allowing the top runners to save fuel. Conor Daly eventually crossed the line in 15th place.

I must admit it was a prodigious experience. Being so close to the action was immensely thrilling. What a contrast between the driver fighting alone out on the race track and the pit crew that sits and waits for long periods of time.

My work only lasted something like three seconds, but it was quite stressful, and mistakes were not allowed. At the same time, I needed to be relaxed, but totally focused at the same time. Being part of the pit crew, just one step away from the race car was really unique and exhilarating. It's one great crew - thanks guys.