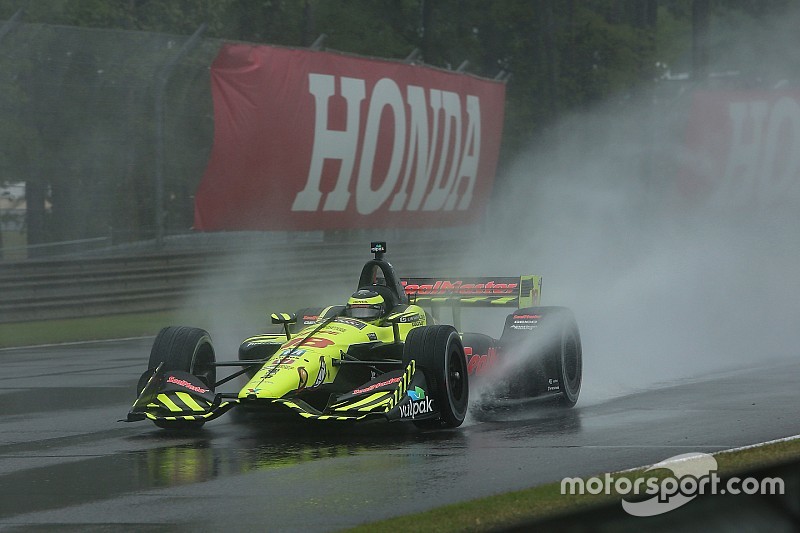 Sebastien Bourdais says that staying out on slick tyres in the increasingly wet IndyCar race at Barber in an attempt to defeat Josef Newgarden wasn’t “the right thing to do”.

Bourdais and Dale Coyne Racing had opted to go for an unconventional one-stop strategy that required fuel saving in the first stint, meaning Newgarden was able to pull a margin of over 25 seconds before his first stop.

Newgarden would eventually cycle back into the lead after Bourdais stopped, but the arrival of persistent rain offered DCR a greater chance to win when Newgarden pitted for wet tyres.

Bourdais and his chief engineer Craig Hampson debated how long he could last on slicks to remain ahead of Newgarden, but conceded defeat and switched to slicks with eight laps remaining.

“[It was] just getting worse and worse, “ said Bourdais after finishing fifth. “Dale [Coyne] wanted to go for the win, I tried to give it my best but it lost us more positions in the end.

“It wasn’t the right thing to do, but we were going for the win.”

Team boss Coyne said that Newgarden’s stop for wet tyres proved to be the decisive factor, as he was able to end his fuel-saving run to the flag.

“He did come in for a second stop and when he put his wets on, he had us,” he said. “Everybody ended up coming in.

“Obviously if it had stayed dry, we would have won the race, but he had to come in and that gave him a splash.”

The enforced step meant Bourdais lost places to Andretti’s Ryan-Hunter Reay, who gave up on a similar slick gamble earlier on, and the Schmidt Peterson Motorsports duo of James Hinchcliffe and Robert Wickens.

That meant Bourdais was left to a battle with Chip Ganassi Racing’s Scott Dixon, who had also mimicked the DCR driver’s strategy.

The pair went side-by-side until a drag race to the finish allowed Bourdais to narrowly hold onto fifth.

“We completely lost the wet tyres, I don’t really know why,” explained Bourdais. "The last two laps I was losing something like three seconds a lap, which didn’t really matter at that point.

“We were in it to win it, we did everything we could and it seemed it was going to be good enough because I saved a load of fuel.

"I wasn’t going to have to save very much once Josef had done his splash, I think we had beaten him. Then the sky opened and that was that.“