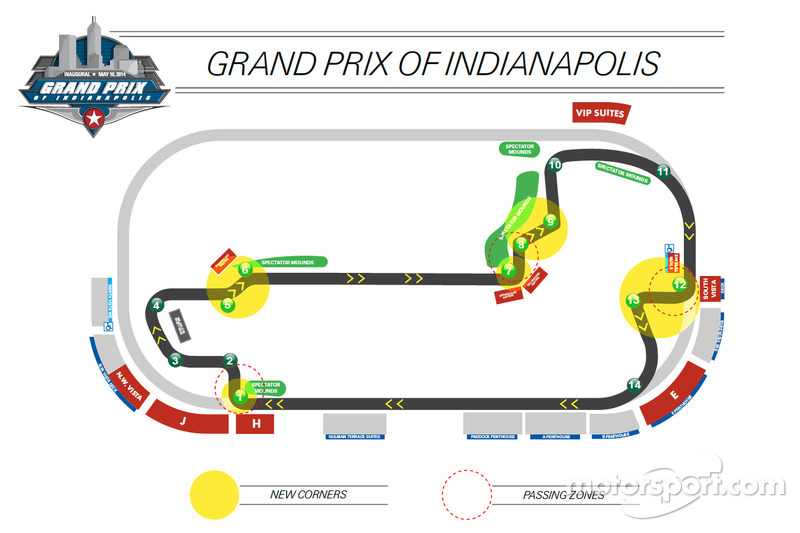 A 14 turn, revamped Indianapolis road course will greet the IndyCar series May 10, 2014.

INDYCAR held a press conference at the Indianapolis Motor Speedway to announce the details of the upcoming road course race at the venue during the first week of May next year.

The biggest announcement was the layout of the track, which will be be created and completed for Dec. 1.

The track will be a 2.434 Mile, 14 turn track, using the clockwise version of the track. The unchanged corners from the road course layout are turn 1, 2, 3, the set of corners after the Hulman straight will be unchanged, and new large corner that bypasses the oval’s turn 1 will be created.

“When I tested here, I really enjoyed it. It was quite slippery and not many passing zones,” said Graham Rahal. “With long straight-aways here, there will be variance if you want to run high downforce or low. This will be one of the most exciting tracks we get to see.”

“This is a historic afternoon for all of us here at the Indianapolis Motor Speedway,” said President Doug Boles. “It always has been and always will be about the Indy 500. (If we) elevate the beginning of May, and at the end of the day we will elevate the Indy 500.”

Boles mentioned the cost of tickets being a simply $25 per person, or a family of four for $50. There will be new mounts created on the inside of the track, to allow better viewing of the road course, as well as optimizing the existing grandstands to only use the best seats in the house.

The event will be held May 10, with the track opening for Thursday practice ahead of the Grand Prix of Indianapolis on May 8. The oval will then be open on May 11 for testing for the 98th Indianapolis 500.

ABC, heading into their 50th consecutive Indy 500 broadcast will carry the road race as well.

“We haven’t changed the tradition. Opening day is still Sunday…the only difference is we have a great race Saturday,” said 2013 Indy 500 Champion Tony Kanaan. “I don’t know where I am going to be, but I will have a car in and try to beat you guys.”

Carpenter team back from trailer fire and ready for Houston

Rahal and Jakes facing a double header in Houston