Motorsport.com's Christopher DeHarde spoke to both Derrick Walker and Marco Andretti about their new rule created during race one yesterday.

By:
Christopher DeHarde
Listen to this article

Marco Andretti was given a drive-thru penalty after failing to heed race control instructions. Andretti had spun after contact from his Andretti Autosport teammate Carlos Munoz caused him to spin and pit for new tires.

Obviously Andretti didn’t agree with the reason for the penalty.

“It’s early in the race, if it was late in the race, I would’ve moved over, they wouldn’t have had to tell me to move over. I wasn’t off the pace, it was because I got spun, if they caught me by a whole lap then they have a point,” Andretti said.

That being said, here is what Derrick Walker said about the situation.

“Marco was going to be a lapped car, and he was given a blue flag, so that wasn’t a penalty, that was an instruction from race control, you have to do it. He disobeyed that for about more laps than he should have […] and so we deferred that decision till after the race because he did give up the position, Walker said.” 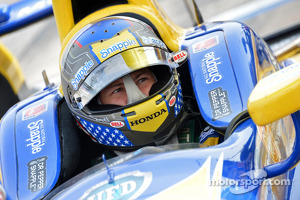 “But we came back after the race, a post race review of that and we said, ‘well wait a minute, he saw the blue flags from the starter stand, his team was told verbally and digitally ‘you’ve got to give the position up’ and he ignored it’, and so really the penalty was about ignoring race control decision, so you can’t just say ‘screw you mate, I’m just going to do it because I think I’m right’ You have to argue about that later, you can’t just take the law in your own hands,” Walker added.

After the post race review, IndyCar officials decided to fine Marco Andretti and Andretti Autosport $2,500 each and put Marco Andretti on probation for three races, including today’s race in Houston.

Walker was asked about the decision to give the blue flag to Andretti and why he was given that flag.

“The fact of the matter is, a car that’s last car on the lead lap has not been blue flagged like that, as far as I’m led to believe, I haven’t been in this job forever. But from talking to my [team], that’s something we haven’t done. So we made a new rule, which, that is another discussion is why should we, should we not, Walker said.”

“The leader’s racing, he has a good healthy lead, how many laps do you have to let it go before Hinchcliffe catches him up, you wait until he’s right up his ass and say ‘oh yeah he’s holding him up there we ought to let him out of the way,’ you have to make that call earlier and when you look at his lap times earlier when we said ‘give him the first blue’, he wasn’t that quick.,” Walker said.

According to Walker, the damage had already been done. Sato lost 3.4 seconds of his lead, but Sato might have had reason to be reserved, as Walker went on to say.

“His team, Sato’s team was telling him ‘he’s getting the blue flag, he’s going to move out of the way,’ so what’s Sato going to do, do a banzai pass and take himself out, he’s waiting for that to get done, so he’s not running as quick,” Walker said.

Whatever your position on Marco getting the penalty or not, this sheds a new light on the entire situation.

Andretti upbeat for Indy 500, happy his dad is strategist

Herta doesn't want to be "an exception" over F1 superlicence