While Ryan Hunter-Reay finds himself in uncharted territory at this stage of his career, standing as the IZOD IndyCar Series points leader with just five races remaining, there are plenty of other subplots for the series at this weekend’s Edmonton Indy.

On July 12 Chief Operating Officer Marc Koretzky “resigned” in a move so hasty that it caught many of INDYCAR’S employees off-guard.

To borrow a phrase, “Koretzky, we hardly knew ye” would be appropriate considering he held the position so briefly. Although he joined INDYCAR in May 2011 as Director of Business Development he was in charge of the commercial activities and non-racing events that surrounded the ill-conceived and ultimately ill-fated 2011 IZOD INDYCAR World Championships. His biggest claim to fame was shutting down “The Strip” as all 34 cars entered in the season-finale at Las Vegas Motor Speedway ran down Las Vegas Boulevard for what would be the ultimate IndyCar Photo Op. 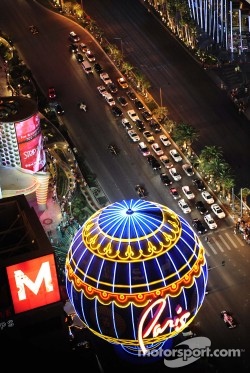 All good photo ops need proper lighting and that was certainly the case as it was too dark, even with the bright lights and glitter for that to be effective. Many of the visitors on The Strip that night complained about the street being shut down because they came to see Las Vegas for all of its decadent appeal not an IndyCar traffic jam.

Although it seemed like a great idea at the time, it didn’t generate what INDYCAR CEO Randy Bernard had hoped – enthusiasm for a show-stopping event that would benefit the championship finale.

It was a major falling out between Bernard and former INDYCAR Commercial Division President Terry Angstadt in December that thrust Koretzky into the COO position. He was the man in charge of implementing Bernard’s vision by overseeing the day-to-day organization operations of INDYCAR.

In many ways, Koretzky seemed ill-suited for the job. He was young and knew little about the inner workings of racing.

On Friday at Edmonton’s City Centre Airport – site of the 13-turn, 2.224-mile street circuit where the IZOD IndyCar Series stars are competing – team members believed the series needed a “scapegoat” for some of the failures of the 2012 season. Even several INDYCAR officials indicated that was a plausible motive.

But among the team members in the paddock, Koretzky was described as a man who “had no dynamic with any of the team owners.” He was considered extremely confident but lacking in the knowledge of what the sport desperately needs to move forward.

When a dismissal is announced with the terms “resignation” and “effective immediately” that generally means a major difference of opinion. The real reason for his departure will probably never be announced but it was clear he was not held in high regard by many of INDYCAR’S partners. But in fairness, to Koretzky to blame him for scheduling fiasco that developed with the proposed August race in Qingdao, China would be unfair.

INDYCAR and before that the now-defunct Champ Car World Series have always been fascinated with proposed races in the Far East. For several years, Champ Car had a street race in Ansan, South Korea on the schedule but it never happened. INDYCAR saw an opportunity to score a huge sanctioning fee from promoters in China to help boost the bottom line, but entering the season there was concern it was another race that wouldn’t happen.

When the race was canceled in June that left the series in a difficult position. It needed a minimum of 16 races to fulfill a requirement with series sponsor IZOD. For a while, it appeared an IndyCar race would be part of the ALMS weekend at Road America in Elkhart Lake, Wisconsin on August 19. INDYCAR and Road America were unable to come to terms on the sanctioning fee and without any other options; the schedule was dropped to 15 races. Whether that has a detrimental impact on its relationship with IZOD remains to be seen although Phillips-Van Heusen Executive Vice President of Marketing Mike Kelly gave consent for the reduced schedule.

Bernard has gone on record as saying he wants a 19-race schedule for 2013 but a quick look at which venues will be back, which ones are in jeopardy and the potential additions to the schedule and it falls short of that number.

There has been much for the series to brag about this season including the spectacular performance of the Dallara DW12 chassis, the return of turbocharged engines, a fierce manufacturer competition between long-time partner Honda and American automotive icon Chevrolet, an entertaining points race where a driver from the United States – imagine that – is the points leader with five races to go.

But instead of properly promoting those accomplishments, it’s been a constant case of damage control – from Bernard’s “Tweet” that an IndyCar team owner wanted him fired just two days after the most competitive Indianapolis 500 in history, to harsh words about the future of Texas Motor Speedway on the IndyCar schedule, to the China cancellation and last week’s “resignation” by the man who was supposedly in charge of the day-to-day operations of the series.

The IZOD IndyCar Series features some of the best racing on the planet with some of the best drivers in the sport. But far too often it resembles the dysfunctional “Ewings” from television's “Dallas.”

What INDYCAR needs to do is shift the attention back to the race track and away from the many missteps and failures that happen on the business side.

In many ways, Koretzky’s departure will not have a detrimental effect on the series but it’s another example of “What’s next?”