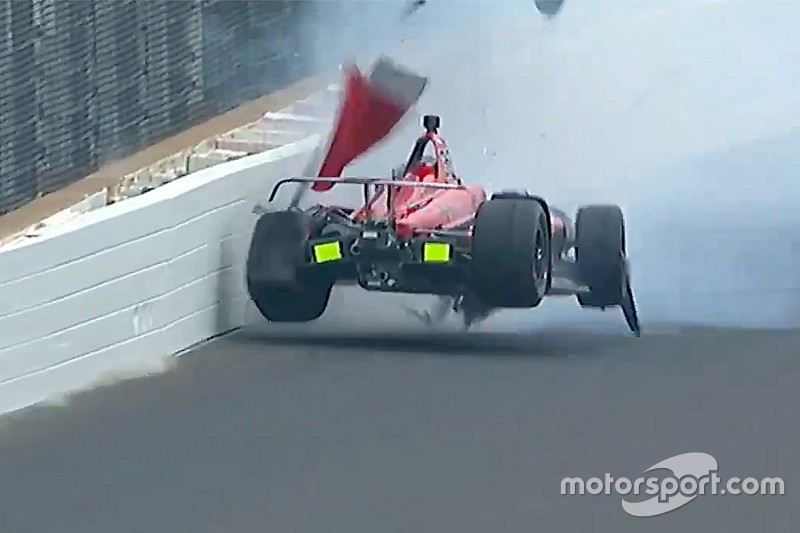 David Byrd says he thinks a gust of wind blew James Davison’s car out of shape at IMS Turn 2 during Fast Friday, sending it into the SAFER barrier, fortunately extended this year by 58 feet to cover just where the wayward car struck.

The damage leaves the AJ Foyt Racing with Byrd/Hollinger/Belardi team “racing against the clock” to get the car fixed in time for qualifying tomorrow, after which two of the entrylist of 35 cars will be eliminated from the event.

Byrd told Motorsport.com: “We think it was a gust of wind. He was on the third lap of a qualifying simulation, so the front wasn’t starting to go away yet. If you look at the in-car footage, he was into Turn 1 really easy, late apex, straightens it up and then he’s into Turn 2, and then all of sudden he’s just gone. No explanation for it.

“There was no moment or wiggle in Turn 1, and if you get that fine then you figure you’re going to be OK. James has never walled a car here, not on his own.”

Byrd said despite the accident happening at over 200mph, the car was repairable.

“The tub’s fine, so’s the engine and bellhousing – it’s just bolt-on parts [we need to replace].

“But… it’s not ideal. Fortunately we’ve got a good group of guys to work on it to pull it apart and put it back together. We’ve got the parts list of everything we need. And Bob Lazier came over and said, ‘Hey, we’ve got a car just a few blocks away. If there’s any parts you need, let me know.’ So that was cool, and between that, and parts that the Foyt team have and Dallara, we should be OK.