With Carpenter taking home the win at Texas Motor Speedway, can his team, with driver Mike Conway, grab two more wins in the Lone Star State?

Although the driver will change, the objective will not for Ed Carpenter Racing, and that’s winning.

The last time a team scored a sweep of races in the Lone Star State in American Open Wheel Racing was when A.J. Foyt won both races at Texas World Speedway in 1979, and Mike Conway will be looking to do the same for ECR during the Shell and Pennzoil Grand Prix of Houston double header.

The gamble to hire Conway to handle the road and street courses while team owner Carpenter handles the ovals has paid dividends for the small Indianapolis-based team. Conway won at Long Beach and is coming off of a less than stellar weekend at Detroit, so he will be looking to come back to victory lane. 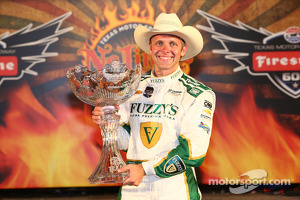 Carpenter was able to win the Firestone 600 at Texas Motor Speedway, completing the first third of the Texas sweep, since Houston is a double header.

Conway will have a large hill to climb in Houston. He ended the first practice session in 22nd place, a full 2.08 seconds off of the fast time of Will Power. He seems optimistic, however, about his chances.

“We’ve got a good chance to [sweep Texas]. Ed got some guns and a Stetson and I’ve got the chance to get some boots this weekend. I don’t know, we’ll see. I think everyone’s pretty confident, but double headers, it’s always tough [to win],” Conway said.

Carpenter was more pragmatic about his team’s chances to sweep the Texas rounds of the championship.

“Sure it would be nice. But look, it's so hard to win in this series that it's hard to expect something like that. But wherever we go, we try to be the best and contend for wins so we'll see how this weekend shakes out,” Carpenter said.

Five drivers that need to perform in Houston