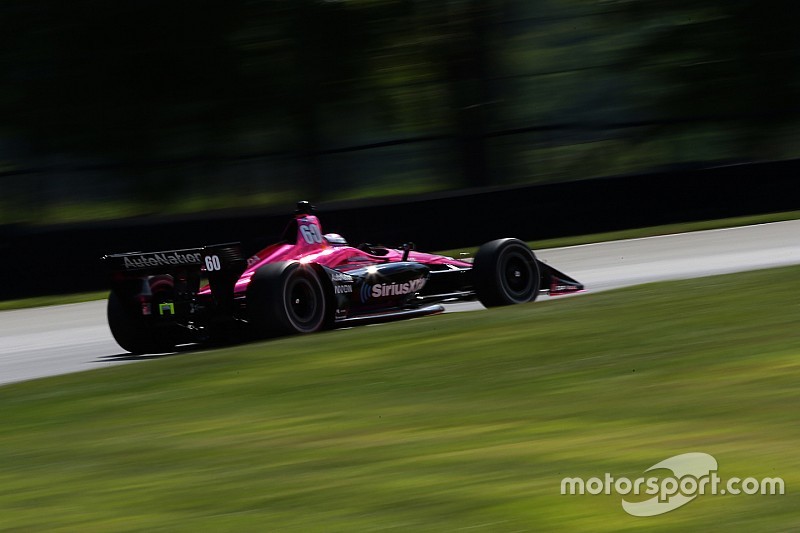 Jack Harvey twice finished runner-up in Indy Lights, and is now a part-timer for the Schmidt Peterson-affiliated part-time entry for Meyer Shank Racing in IndyCar. Is it still possible to shine as a part-timer? Harvey spoke to David Malsher.

The previous-gen Indy Lights car was a compromise – an all-oval car developed into one that could also make a passable impression of a road/street course device. It created some decent racing, no question, but it handled like no other open-wheeler.

Consequently, one always felt that the Lights drivers – surely the priority in any so-called ‘feeder formula’ – were at the mercy of their teams and engineers. Those who successfully adapted their cars to turning right as well as left and understood the repercussion of their car’s odd weight distribution would hand their drivers a considerable advantage. Those who got lost could expect little help from their drivers because the car was such an anomaly, the guy in the cockpit couldn’t tell what the car needed.

Matt Brabham, a champion in USF2000 in 2012 and a true sensation in Pro Mazda (then called Star Mazda) in 2013, struggled to bend his Andretti Autosport car to his will and finished ‘only’ fourth in the 2014 championship. By contrast, Jack Harvey who’d taken seven wins and nine poles on his way to the 2012 British Formula 3 championship and then scored a couple of wins in GP3, was able to adapt to the Schmidt Peterson Motorsports entry and ended the season in a points tie with Belardi Auto Racing’s Gabby Chaves. The championship went in the Colombian’s favor due to number of second places.

For lack of any offers from IndyCar teams, Harvey then stayed on in Indy Lights which for 2015 switched to the all-new Dallara IL15-AER Mazda. Impressively, the Briton finished second again.

It took a year for Harvey to then land his first ride – a Michael Shank-run Andretti Autosport entry in the 2017 Indy 500 – but Shank, AutoNation and Sirius XM had seen enough to keep faith with him. Later that year, when Schmidt Peterson Motorsports parted ways with Mikhail Aleshin, they called on their former Indy Lights star to fill in at Watkins Glen and Sonoma. He was 0.45sec slower than teammate James Hinchcliffe in qualifying at the Glen, and 0.32sec off at Sonoma.

It was an encouraging start for someone parachuted in somewhat last-minute, and Harvey deserved his current opportunity, driving a third SPM car part-time for the Meyer Shank Racing team. But in a year when the majority of his rivals are learning about the new aerokit in every session, it’s tough for Harvey to make an impression since this weekend’s Honda 200 at Mid-Ohio SportsCar Course is only his fourth race of the season. He was 10th in practice on Friday – ahead of Wickens and Hinchcliffe – but still, the struggle is real…

DM: Continuity is always touted as one of the crucial elements to success in racing. That must make the task faced by you and MSR – in a so-called ‘learning year’ with these aerokits – doubly hard…
JH: Mate, it’s tough. I’m not one to cry ‘Poor me!’ but the reality is that yeah, it’s hard. I’m not shaking off cobwebs every time, it’s not that, it’s how much more familiar with the car everybody else is. So what I’m experiencing maybe for the first time, the others have maybe dealt with before they got to Indy in May. We’re only doing six of the 17 races this year, this is only our fourth. Obviously it’s not a challenge we’re going to turn down at all; everyone involved loves it. But the quality of drivers and teams that have so much more experience than us means we’re going to always be on the back foot.

Overall I think we’ve done a good job. St. Pete was going to be good until we had the tire let go, Long Beach was all about caution periods and who caught them the best or worst. We were on an in-lap when a yellow came out which screwed us a little bit. At Indy, we were so close on fuel to getting at least a top three there…

So I think we’ve done a good job with the opportunities available. SPM cars have had some real form this year, and everyone at Meyer Shank can be proud of what we’ve done when we’ve been out there. I know there’s a way to look at it whereby some of the things that SPM are testing, we stand to benefit because we come in at the endpoint, when the stuff is proven… But ultimately I’d prefer to be the one doing that testing, getting the miles in, getting familiar with it and not just taking someone else’s word for it.

Both Todd Malloy [SPM’s chief engineer] and Piers Phillips [SPM’s general manager] have said one of the reasons for great team progress this year is that everything that works for Robert Wickens works for James Hinchcliffe and vice-versa. Do you have a similar driving style to them?
Luckily I fit in well – I think all three of us are on the same page. When we tested at Mid-Ohio, some of the things I tested in the morning, I gave them feedback, and Robbie went out in the morning and gave extremely similar feedback. That’s great, because it means we can distribute testing items among us, split the workload, and trust each other’s judgment.

There are little differences between Robbie’s and James’ driving styles and mine’s a little different again, but generally we’re all looking for the same things, and so yeah, Todd and Piers are right to say that helps. But I also think it’s fair to say Robbie and James really push each other – they’re incredibly fast, incredibly smart and they’re super-nice guys. But I still say we’re able to contribute.

Is your Indy Lights experience more valuable or less valuable in the 2018 spec-aerokit IndyCar than when they had manufacturer aerokits?
Mmm, these cars definitely drive more like the Lights car, so that’s good for anyone coming up from Lights. But Jordan King is a good example of a driver with Formula 2 experience who jumped in this new IndyCar and was quick. So is it critical to come and do Indy Lights first? Not necessarily. I mean, it certainly helps on ovals because you won’t find them in Europe so to go out and learn oval racecraft is extremely valuable but I think you can put good drivers in any car and they’ll be quick. The best drivers adapt.
You’re going to get a little more continuity by doing all the remaining road course rounds – Mid-Ohio, Portland, Sonoma. Do you see this as the big opportunity to make an impression?
Definitely, and the thing is, doing a part-time schedule isn’t just hard on me – it’s hard for our guys on pitlane, when they only do six races a year, having to pick up and compete with the other crews. One of the reasons why Portland was on our schedule for the year was that it’s going to be new to most of the drivers out there, so it reduces our disadvantage a bit. At the moment I don’t know if I’m doing the Firestone test there though.

Do you feel extra pressure racing in front of Michael Shank’s home crowd?
Yeah, but it’s a good pressure. I used to feel it in Formula BMW or GP3 whenever I was racing in front of a home crowd in the UK, but it’s the sort of pressure that puts an extra spring in your step. For Michael, I’m sure it’s the race where he’d most want us to excel outside of the Indy 500. I want to do a good job for him and the people he’s bringing, but I think we also want some really strong results to finish off the season and hopefully do something bigger in 2019.

Are your sponsors enthused enough to help you and Shank step up fulltime in 2019?
I think AutoNation and Sirius XM are happy with what we’ve done so far and the exposure they’ve received and hopefully talks will be starting shortly about trying to expand for next year. Certainly everyone knows that’s the mutual goal. A full season might be a stretch, but if we could get to double digits, that would be awesome. It’s a fluid moving target.

Are you focused on Meyer Shank Racing?
Yeah, I’m locked in with Michael – their deal with SPM was for 2018 and ’19 – and honestly, I’m happy about that. And if Michael were to come to me and say, ‘What do you think of a longer-term deal?’ I would say ‘Yes.’ I want to stay with Michael for quite a few years, and to see the effort eventually go full-time.